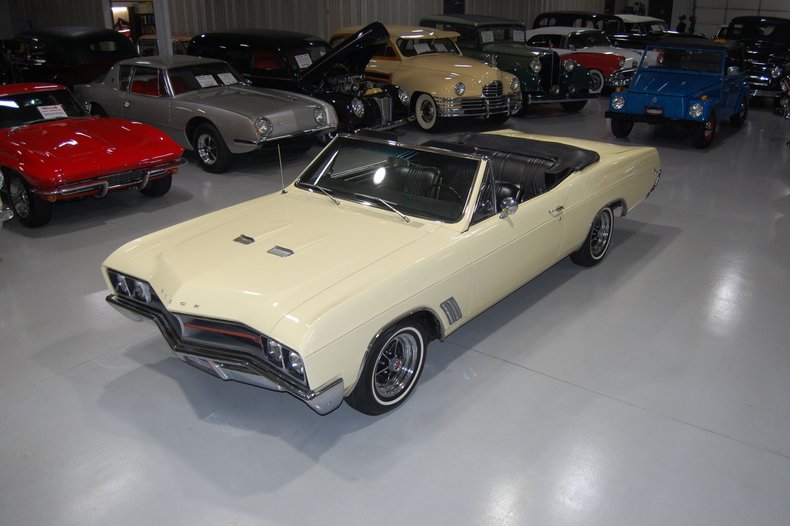 This 1967 Buick GS 400 is the quintessential gentleman's muscle car, with fantastic power and great options. The Gran Sport debuted in 1965 as a mid-year performance-oriented option package for the Skylark, which was Buick's plush intermediate model. In 1966, the GS became its own standalone model as Buick started to lean into the muscle car image of the day. Interestingly, the Gran Sports were equipped with 401 Cubic Inch V8 engines, however they were advertised as 400 V8s due to General Motors' 400 CID limit on their mid-size offerings at the time. 1967 saw the debut of the GS340 which was the low-cost version of the Gran Sport, but the GS-400 was still the big dog on the block. The advertising for the GS400 in 1967 centered around the fact that even though the GS-400 was truly a muscle car, it has rich options and plush interiors as one could expect on a Buick. The '67 GS stood out from the rest of Buick's offerings at the time with twin air scoops on the hood, special badging, and GS grille. The 2 door convertibles are pretty rare with only 2,140 units produced in 1967. This particular GS400 comes to us from a Southern-based collector who purchased the car from a Nevada-based collector. Under the hood on this Buick is a 401 Cubic Inch V8 engine with a single 4 barrel carburetor tucked under a super cool looking twin-inlet "Star Wars" air cleaner that pushed out 340 horsepower in its day. Anybody can take this Buick Convertible for a spin because the 400 V8 is hooked up to an Automatic Transmission. Being that Buicks were luxury cars at the time, the Gran Sports typically came loaded with options. With power steering, getting in and out of tight spaces at car shows is much easier as is squeezing into a tight garage spot. Power brakes assist you bringing this Buick to a stop with all that extra muscle under the hood. The black vinyl power convertible top goes up and down with ease with the simple flick of a switch under the dash. This GS400 is even equipped with power windows for that extra touch of luxury. The exterior on this Buick GS has been beautifully refinished in Ivory. This Buick GS-400 rides on whitewall radial tires wrapped around Rallye rims that give this muscle car a fantastic look and an even better ride. The interior on this Buick GS is stunning! The front bucket seats and rear bench seat have been correctly reupholstered in Madrid grain black vinyl that provides a nice contrast to the exterior look of the car. This GS400 is also equipped with a center console that houses the Automatic shifter and provides a bit more storage. The padded dash, door panels, and steering wheel are all in wonderful condition and appear to be in their stock configuration. The dash is equipped with a 120 MPH speedometer, fuel gauge, indicator lights, clock, and Sonomatic radio. Whether your garage is filled with 60s muscle cars or you're in search of your very first classic car, this 1967 Buick GS 400 Convertible would be an excellent choice. Give us a call today!