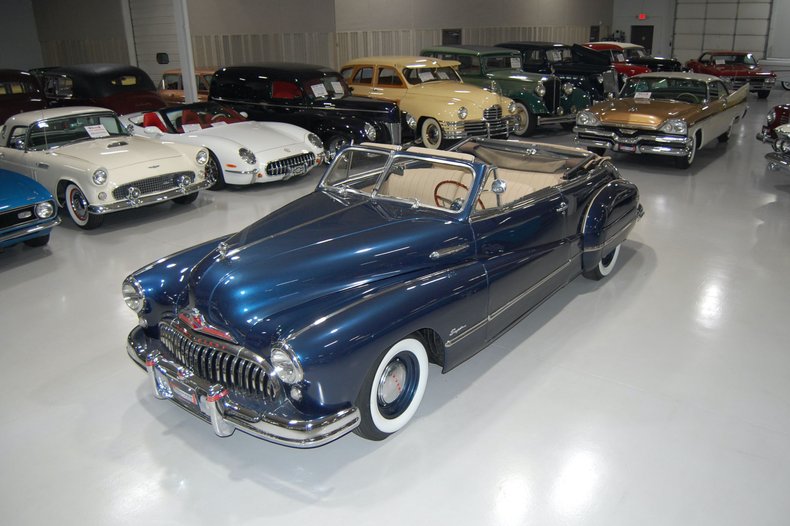 This 1948 Buick Super 8 Convertible is a beautiful cruiser that is sure to grab anyones eyes rolling down the road or at the local car show. Consumer demand for Buicks were strong after the war, with many of the returning soldiers yearning for a nice family home in suburbia with a luxurious Buick in the driveway. The Buick Super was the mid-level model for Buick, less expensive than the Roadmaster but nicer than the Special. Despite high demand at the time for new automobiles, the early post-war Buicks were just slightly different than the 1942 models, with the '48 Supers featuring new "Super" script on the front fenders and a bit of a lower stance. The '48 Super Convertibles were advertised as "the smartest thing on wheels" and "your constant invitation to adventure." Under the hood on this particular '48 Buick Super Convertible is a 248 Cubic Inch Inline 8 Cylinder engine paired with a single 2 barrel carburetor that pushed out 115 horsepower in its day. The 248 Straight 8 is mated to a 3 speed manual transmission with a column-mounted "three-on-the-tree" shift lever, which was standard equipment back in 1948. The engine has received several reliability upgrades including an electric fuel pump, an alternator that replaced the antiquated generator, and 12 volt electrical system. The beige cloth power convertible top is in nice shape and goes up and down with the simple push of a button. The exterior on this '48 Buick Super Convertible has been refinished in a beautiful Custom Dark Blue paint job. The interior on this '48 Buick is superb. The front and rear bench seats were recently reupholstered in a beautiful beige imitation leather that provides a beautiful contrast in the overall look of the car. The dash, door panels, and steering wheel all appear to be in their stock configuration as well. The dash is equipped with a speedometer, battery gauge, temperature gauge, oil pressure gauge, and fuel gauge, as well as an AM Radio and clock. If you're looking for a classic convertible with a great look, this 1948 Buick Super 8 Convertible is the car for you. Give us a call today!