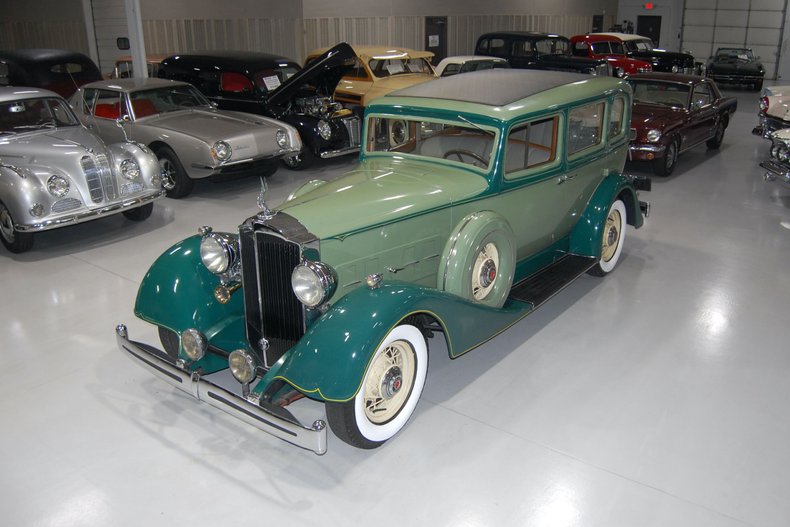 This 1934 Packard Eight Model 1100 Sedan is an elegant and luxurious automobile and is a former AACA National First Place recipient. "Ask the Man Who Owns One" is Packard's famous tag line and when the company introduced its new Packard Eight on August 21, 1933, it described its new car as "the yardstick with which to measure all fine car values." By 1934, Packard was probably in the strongest position of the manufacturers comprising the "Three P's," Pierce-Arrow, Peerless, and Packard, which were the leading independent luxury American auto manufacturers. Coming off its most successful (and only profitable) year, the 1934 Packards further refined its existing product offerings but those well-received refinements did not seem to improve Packard's sales. In 1934, Packard's most economical line, the Packard Eight, was divided into 3 model series based off of the wheelbase lengths. The only body style in the Model 1100 series was a 4 Door Sedan which could comfortably seat 5 passengers. This particular '34 Packard Eight 1100 was originally sold new by Jones & Manske Inc. in Reading, Pennsylvania, and comes to us from a longtime Florida-based collector. Also, being that this Packard is a 1934 model, it is an Approved Classic Car Club of America (CCCA) True Classic. Under the louvered hood on this '34 Packard is a 319.2 Cubic Inch L-Head Inline 8 Cylinder engine with a single barrel carburetor that pushed out 120 horsepower when it was new. The Straight 8 engine is mated to a 3 speed manual transmission that is shifted using a floor mounted shifter which gives this classic masterpiece a really nice feel when driving. The exterior of this Packard has been refinished in a beautiful two-tone paint scheme comprised of Chickory Green and Arcady Green with Yellow striped accents. Sitting on 4 wide whitewall bias ply tires wrapped around wire wheels with Packard Eight Hubcaps, this 1100 Sedan has a truly classic look. Dual side mounted spare tires further add to the luxurious appearance of this premier automobile. The interior of this luxury pre-war Packard is extravagant! The front and rear bench seats have been reupholstered in a beautiful Gray Broadcloth and have an elevated tufted look. The front door panels, rear suicide door panels, headliner, wall coverings, and rear arm rests have been recovered in the matching gray broadcloth as well, tying the entire interior look of the car together. The woodgrain trim around all of the interior windows along with the woodgrain trim accents are in fantastic condition. The woodgrain dash and steering wheel are in wonderful shape as well and have a period correct look and feel. The chrome instrument cluster appears to be in its stock configuration and is equipped with a 120 MPH speedometer, oil pressure gauge, gasoline gauge, temperature gauge, amp gauge, Waltham clock, and a key-locked AM Radio, which was a new addition for the 1934 Packards. Whether you're a full fledged CCCA member or you're looking for your very first classic Packard, this 1934 Packard Eight Model 1100 Sedan would make an excellent choice. Give us a call today!