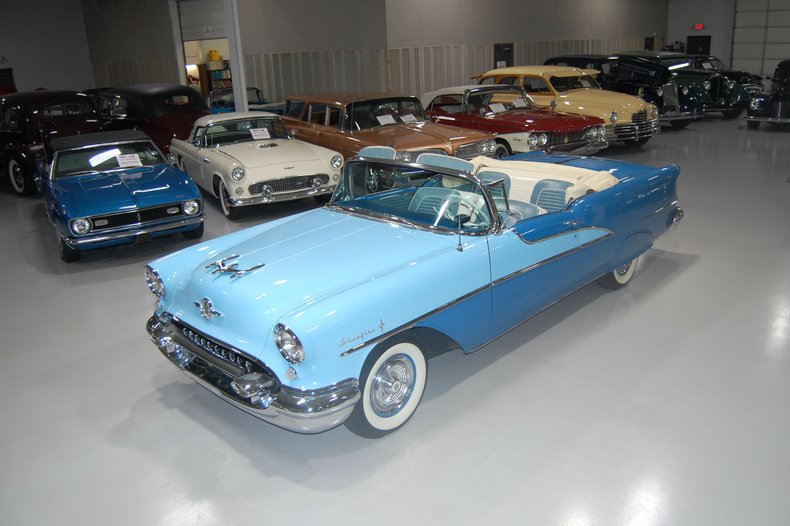 This 1955 Oldsmobile 98 Starfire Convertible is a well-optioned, multi-time national award winning car. In 1955, the nicest, most luxurious, and most expensive car offered by Oldsmobile at the time was its Starfire Convertible. Of course Olds lovers know that the name "Starfire," which was borrowed from the Lockheed F-94 Starfire interceptor jet used by the United States military, designated the 98 Convertibles, just as "Holiday" designated the 98 hardtops. Originally introduced at the 1953 Motorama Show as a concept car, the original Starfire was a fiberglass-bodied convertible with a wraparound windshield and then was later adapted into the top-of-the-line 98 Convertible. This particular Ninety-Eight Starfire won several national awards following its extensive restoration and is believed to have been in the hands of collectors ever since. Powering this '55 Starfire is a 324 Cubic Inch Rocket V8 engine with a single 4 barrel carburetor that pushed out 202 horsepower in its day. The Rocket V8 is hooked up to a Hydra-Matic Transmission that makes this convertible easy for anybody to drive. This '55 Olds is also particularly well-optioned, as many of them were back in 1955. Getting in and out of tight spaces is made easy with Power Steering, which was a $120 option when ordered new with the Starfire. This 98 Convertible is also equipped with power brakes to provide plenty of stopping power for that Rocket-powered powerplant under the hood. The white vinyl convertible top is powered as well, going up and down with the simple push of a button. The exterior has been re-finished in the original two-tone color scheme of Twilight Blue and Panama Blue. This Oldsmobile sits on 4 wide whitewall bias-ply tires with full wheelcovers, completing the exterior look of the car. The interior is in wonderful shape as well! The blue and ivory leather bench seats have all been re-upholstered in their original color combination and have a fantastic look. The interiors on these 98 Starfires all came loaded, and this particular one has additional options beyond the standard equipment. Power seats and power windows were standard equipment on these top-of-the-line Starfires. This Starfire also features an Autronic Eye mounted on the padded dash, which was a pretty cool piece of technology back in 1955. The deluxe steering wheel and padded dash are both in their stock configuration with a 120 MPH speedometer, amp gauge, temperature gauge, fuel gauge, oil pressure gauge, electric clock, and AM radio. Whether you're looking for a rare Olds to add to your existing collection or you're a first-time classic car buyer, this 1955 Oldsmobile 98 Starfire Convertible would be a fantastic choice. Give us a call today!