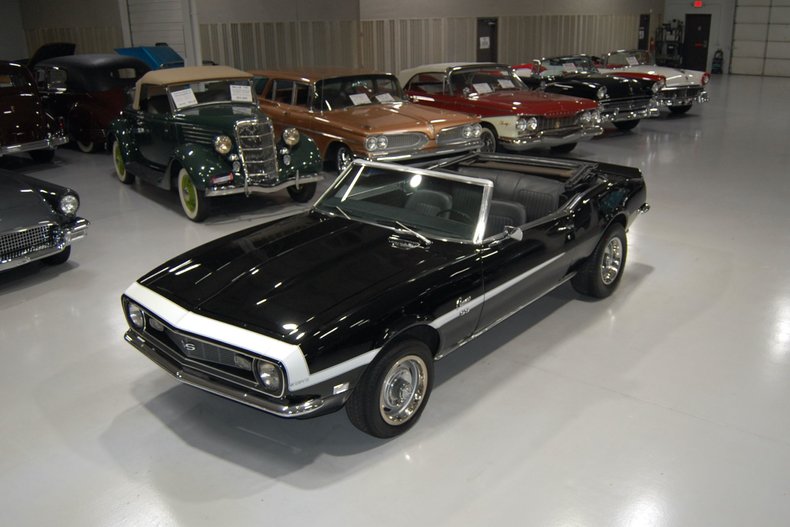 This 1968 Chevrolet Camaro Convertible is a great looking summer cruiser! Chevrolet was pretty late to the Pony car game when it released its own pony, the Camaro, in 1967. The first year Camaros were a mega-hit for Chevrolet selling over two-hundred thousand units in the first year. With their small footprint, higher performance, sporty look, and modest price, it is no wonder that the Camaros were widely popular. Due to their incredible popularity, Chevrolet changed very little on its Camaro between 1967 and 1968. Gone were the front vent windows and front rectangular market lights were added. Powering this particular '68 Camaro is an upgraded and dressed up 350 Cubic Inch V8 engine with a single 4 barrel carburetor. The NOM 350 is hooked up to an Automatic Transmission that is shifted using the classic horseshoe shifter. This Camaro has also been outfitted with many desirable options that make this convertible an absolute joy to drive. Power steering makes getting in and out of tight spaces much easier. Power front disc brakes also give the car plenty of stopping power for the upgraded powertrain found under the hood. The exterior has been dressed up in beautiful Tuxedo Black basecoat/clearcoat paint along with SS striping and badging. This '68 Chevy has an aggressive stance with 205/60R15 radials in the front and 255/60R15 radials in the rear, all of which are on Rally Rims. The black vinyl convertible top is in wonderful shape as well and matches the exterior look of the car. The black bucket seats in the front have just been completely refurbished with new foam and black vinyl upholstery. The center console, door panels, and dash all appear to be in their stock configuration. The dash is equipped with a 120 MPH speedometer and fuel gauge, along with an Autogage by Auto Meter aftermarket tachometer added to the steering column. If you're looking for an awesome Camaro with a little extra performance to cruise around in, this 1968 Chevrolet Camaro Convertible is the car for you! Give us a call today!