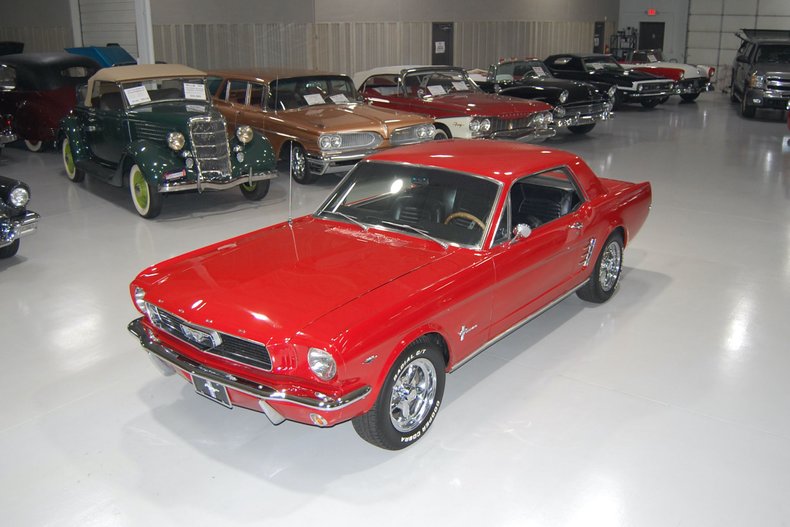 This 1966 Ford Mustang is a cute little pony car that anybody can enjoy! Initially introduced in 1964, the Mustang was a bit of an experiment for Ford that turned out to be a smashing success. The Mustang was marketed a cool new car for young folks that had a sportier look along with some performance, but still modestly priced. After Ford sold over 685,000 Mustangs between 1964 and 1965, the company made only minor changes to the 1966 model since the previous year cars were so popular. One of the most notables aspects that changed between '65 and '66 was the grille, with the 1966 version featuring a floating Mustang logo. This particular '66 Mustang comes to us from a Florida-based collector. Under the hood on this C-Code Mustang is a 289 Cubic Inch V8 engine with an upgraded single 4 barrel carburetor that gives this classic Ford plenty of muscle. The 289 V8 is hooked up to a 4 speed manual transmission that makes driving this Pony super fun. With upgraded headers and dual exhaust, this 66 Mustang has a nice throaty sound. The engine compartment has also been upgraded with a polished stainless steel curved monte carlo bar as well as chrome valve covers. The chrome and brightwork around the exterior of this car is stellar and gives the car an elevated look. The exterior on this Mustang has been refinished in a beautiful Candy Apple Red basecoat/clearcoat giving the car a truly classic appearance. Sitting on 4 Cooper Cobra Radial G/T Raised Letter Radial Tires with upgraded Legend Vision 5 Spoke Chrome Wheels, this little Mustang has a nice ride and an even better look. The interior is absolutely stunning! The front bucket seats and rear bench have been reupholstered in black vinyl, just like how the car came back in 1966. The black carpeting, matching door panels, center console, and deluxe woodgrain steering wheel all appear to be in fantastic shape as well. The padded woodgrain dash is in its stock configuration, outfitted with a 140 MPH Speedometer, fuel gauge, oil pressure gauge, amp gauge, and temperature gauge, along with an AM radio. Whether you're looking for your very first classic car or you have a stable of Mustangs, this 1966 Ford Mustang is the car for you. Give us a call today!