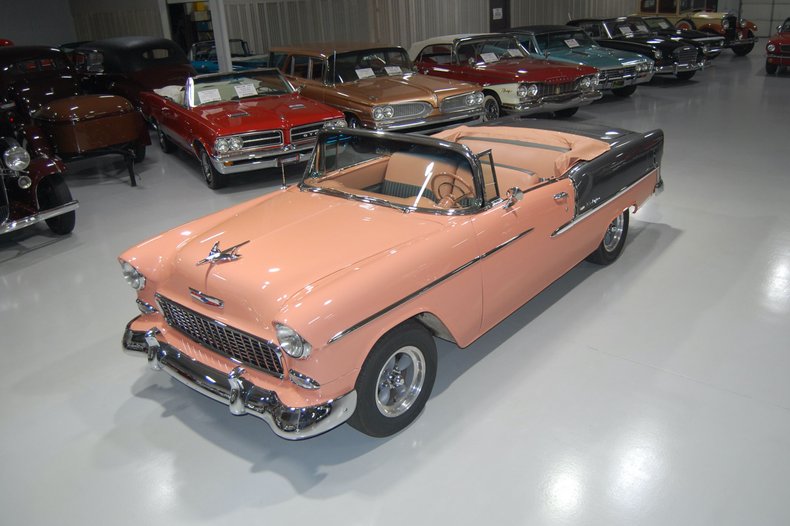 This 1955 Chevrolet Bel Air Convertible Restomod is a frame-off restored, wolf in sheep's clothing. In 1955, Chevrolet completely re-designed its premium Bel Air line, kicking off the Tri-Five Chevy era. The hoods got flatter and the rear quarters became sleeker after Chevy's revamp in '55. 1955 also saw the introduction of Chevrolet's new V8 engine which was a major advancement forward in terms of power and reliability. Of the non-station wagon models, the 2-door Bel Air convertibles were by far the most rare, making up about 5% of total production in 1955. This particular '55 Bel Air Convertible underwent a complete frame-off restoration at which time it is believed that car became a restomod. An upgraded GM Crate 350 V8 motor with a single 4 barrel carburetor provides improved horsepower to this Restomod Bel Air. Power is sent to the rear positraction axle that is sure to keep the rubber to pavement. Driving this '55 Chevy is an absolute blast with an upgraded floor-mounted 4 Speed Manual Transmission that allows you to go through all of the gears. Being that this Tri-Five Chevy is a Restomod, it's loaded with numerous options. Power front disc brakes provide plenty of stopping power for the upgraded drivetrain. Power steering makes getting in and out of tight spaces much easier and improves the overall drivability of this classic Chevrolet Bel Air Convertible. The dark gray vinyl power convertible top works great and goes up and down with the simple toggle of a switch. The exterior on this 1955 Bel Air Convertible has been refinished in a two-tone color scheme of Coral and Shadow Grey. The wheels and tires were also upgraded and now feature Torq Thrust American Racing Rims with Radial Tires, which make for a much smoother ride cruising down the road. Also worth noting is the chrome and brightwork found inside and on the exterior are in fantastic shape. The interior on this Restomod Convertible is stellar. The front and rear bench seats have been reupholstered in Coral and Dark Grey vinyl that complement the exterior look of the car. Since this Belair Convertible features an upgraded power steering setup, the original steering wheel has been upgraded to smaller circumference wheel that provides improved space for the driver. The dash and gauges appear to be in a mostly stock configuration with a 100 MPH speedometer, AM radio, electric clock, temperature gauge, and fuel gauge. An aftermarket oil pressure gauge has been neatly tucked under the dash and a steering column mounted tachometer have been tastefully added for improved reporting to the driver. Perhaps the most significant interior upgrade on this '55 Chevy Bel Air Convertible is that Air Conditioning has been added to make those hot summer cruises a bit more comfortable. If you're looking for a Tri-Five Chevy that you can just hop in and drive, this 1955 Chevrolet Bel Air Convertible Restomod is the car for you. Give us a call today!