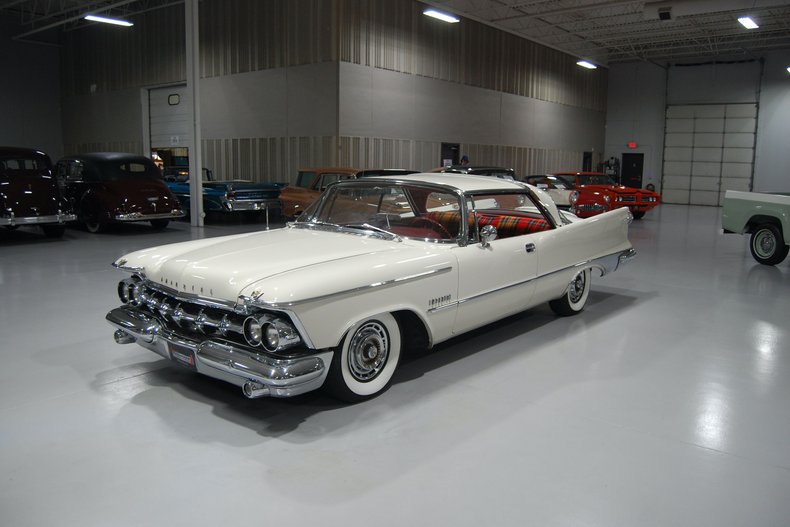 This 1959 Imperial Crown is a strong running winged car that was one of the last of Virgil Exner's forward look design. Imperial was initially introduced in 1946 as the plusher, more luxurious Chrysler car. However, it wasn't until it was spun off as it own separate brand in 1954 that Imperial began to develop its own unique and elevated stylings. Notably, Imperials had "freestanding" taillights, faux continental kits, upgraded grills, prettier trim, improved options and more, positioning Imperial to compete GM's Cadillac and Ford's Lincoln marques, and distinguishing Imperial from the less luxurious Chryslers. The 1959 Imperials featured a more jazzed-up front end from the previous year, with chrome headlight pods that tied into the newly redesigned chrome grill. This particular Imperial Crown came to us from a large local collection where previous ownership did not have the ability to fully complete a few remaining aspects of the cosmetic restoration. Powering this 1959 Imperial is a 413 Cubic Inch Wedge Head V8 engine with a single 4 barrel carburetor that pushed out 350 horsepower in its day. The 413 V8 is hooked up to an automatic transmission that anybody can enjoy, especially since it is shifted using the famous dash-mounted Push-Button controls. Being that these Imperial Crowns were the top-of-the-line model for Mopar back in 1959, most of them (including this one) came loaded with many desirable options. Power steering makes driving this Imperial Crown much easier and thus more enjoyable. Power brakes provide enough stopping power to bring this 4,800+ pound classic car to a stop. This Imperial is outfitted with Air Conditioning so that you can stay cool even on the hottest summer days. The Flite Sweep deck lid makes this Imperial stand out in a crowd. This '59 Imperial has been refinished in its original Ivory color that complements the chrome and golden trim around the exterior of the car. This Imperial Crown sits on 4 wide whitewall radial tires with full wheelcovers that give this classic Mopar a truly 50s look. One of the coolest features on any 1959 Imperial is the burgundy vinyl/cloth bench seat is not only a power seat but also twists out to make it easier for to get in and out. The rear seat appears to be original to the car but is one of the few items still in need of restoration. The interior of this Imperial is also particularly well-optioned, equipped with power windows, padded dash, push-button shifter, touch tuner radio, dash-mounted rear-view mirror and more. The padded dash is in its stock configuration and features a 120 MPH speedometer, temperature gauge, battery gauge, gas gauge, oil pressure gauge, and clock. Whether you're looking for a super cool driver or a project that you can easily take to that next level, this 1959 Imperial Crown is an excellent choice. Give us a call today!