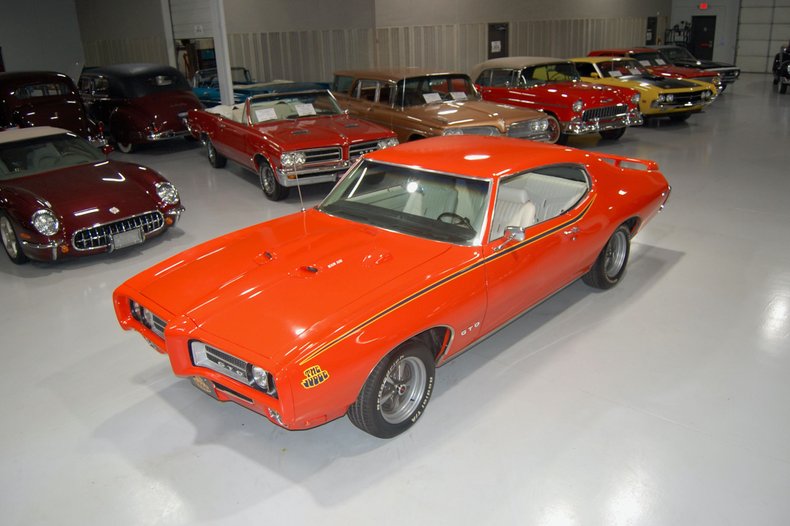 "Here Comes The Judge!" This 1969 Pontiac GTO "Judge" Ram Air III is a PHS documented, show-stopping muscle car that is one of the most fun cars to drive. The Judge grew the already wildly popular GTO platform and provided improved performance above many of this muscle car's competitors all for the whopping price of $337.02. Originally released on December 19, 1968, the "Judge" name originated from the "Here Come de Judge" comedy routine on late night television. From there, Pontiac's marketing gurus released numerous memorable "Judge" marketing slogans including "All Rise For The Judge," "You Be The Judge," and "the Judge Can Be Bought." This particular example comes to us out of Arizona where it believed to have been since 1984 and was purchased new from The Clatworthy Company in Fort Morgan, Colorado. It is also believed that the cosmetic restoration was completed in 2018. This Ram Air III Judge also comes with PHS documentation that demonstrates that the car is just like it was when it rolled off the Arlington, Texas factory floor. The numbers matching 400 Cubic Inch Ram Air III V8 engine with a single 4 barrel carburetor pushed out 366 horsepower back in 1969, and still runs strong today. The 400 Ram Air III engine pushes its power to the rear tires through the Safe-T-Track rear end. This Judge was originally ordered with a 4 Speed Manual Transmission that gives this GTO Judge a true muscle car feel while cruising. Drag racers will love that this classic Pontiac was ordered new with a hood-mounted tachometer. With Factory Power Steering and Factory Power Front Disc Brakes, this Ram Air III Judge was ordered new with some of the most desirable "creature comforts." A "72 72" Paint Code Car, this 69 GTO Judge has been beautifully refinished in its original exterior color, Carousel Red. The Judge decals also give this classic Pontiac an excellent exterior look. This 1969 Judge sits on 4 BF Goodrich Radial T/A Tires with Rally Wheels, which make for a much smoother ride going down the road. The Parchment Vinyl Bucket Seats are correct for this Judge, and are in excellent condition. This Judge is also equipped with a center console, which was a $55.82 option back in 1969. The dash, steering wheel and door panels are all in fantastic condition and appear to be in their stock configuration. Whether you're looking for your first muscle car or you have an entire collection, this 1969 Pontiac GTO "Judge" Ram Air III would make an excellent addition. Give us a call today!