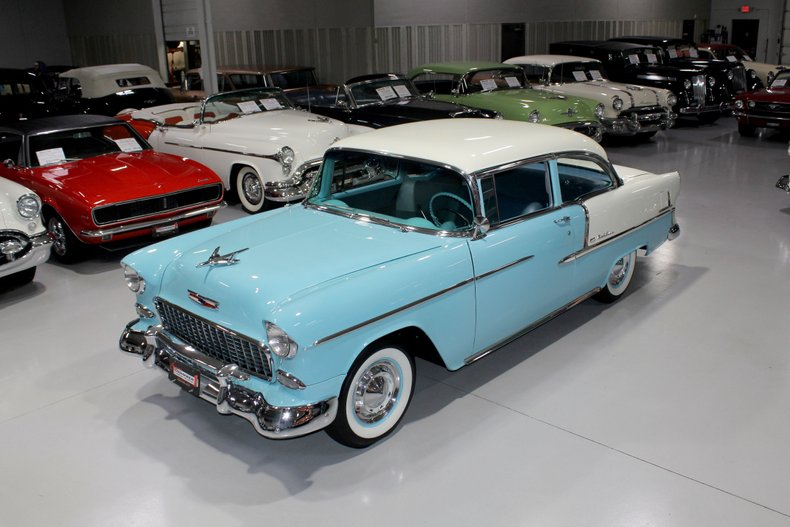 This 1955 Chevrolet Bel Air 2 door sedan underwent an impressive frame-off restoration and is an absolutely gorgeous car! 1955 was a remarkable year for Chevrolet's passenger car line with the entire line undergoing a complete redesign that was both iconic and kicked off the Tri-Five Chevy era. The 1955 Chevys had a squarer exterior appearance (as opposed to the swoopier 1954 bodies) which gave the 1955 cars a bolder, more modern, and thus classic 50s look. Up front of the new-look '55 Chevrolet saw substantial updates including the introduction of the iconic "hooded" headlights, restyled grilles and bumpers, and a cutting-edge wraparound "panoramic" windshield. Of course, the Bel Air series was the top-of-the-line Chevrolet back in 1955, so the Bel Airs featured special side trim that distinguished them from both the entry-level 150 and mid-level 210, but also from the competition. At the tail end, a new taillight design and squarer body lines added to the new modern styling of the 1955 Chevrolets as well. Additionally, the interiors on the Bel Air featured the plushest and most luxurious trim of all of the Chevys that year. Undoubtedly, the biggest update for Chevrolet in 1955 was the introduction of the "Turbo-Fire" 265 V8 engine that would ultimately become the foundation that carried the GM marque through the second half of the 20th century. Powering this '55 Bel Air is a 265 Cubic Inch V8 engine paired with a single 2 barrel carburetor that was said to have created 162 horsepower from the factory. The 265 V8 is backed by a Powerglide Automatic Transmission that ensures that just about any body can take this beautiful Tri-Five Chevy for a spin around the block. Exhaust exits the 265 V8 powerplant via a dual exhaust setup that gives this 2 door post a nice throaty sound. The exterior chrome and brightwork around the exterior of this Belair is in wonderful, show-quality condition. A single chrome outside mirror is mounted on the driver's side to help maneuver the car in and out of those tight spaces at the local car show or drive-in. The exterior on this 1955 Chevrolet has been beautifully refinished in a two-tone paint scheme consisting of Cashmere Blue and India Ivory which gives the car a classic 50s look. A set of wide whitewall bias-ply tires paired with full wheelcovers complete the exterior look of this Bel Air. The interior on this '55 Chevy is absolutely stunning! The front and rear bench seats have been reupholstered in a period correct two-tone blue vinyl and cloth. The Cashmere Blue painted dash, steering wheel and horn ring, blue carpeting and two-tone matching door panels are in excellent condition as well and all of which have a nice stock look. The dash appears to be in its stock configuration and is equipped with a 110 MPH speedometer, temperature gauge, and fuel gauge, along with a stock push-button AM radio and clock. Whether you want to buy your first classic car or you're completing a Tri-Five Chevy collection, this 1955 Chevrolet Bel Air 2 door sedan would make a superb choice. Give us a call today at 763-428-7337!