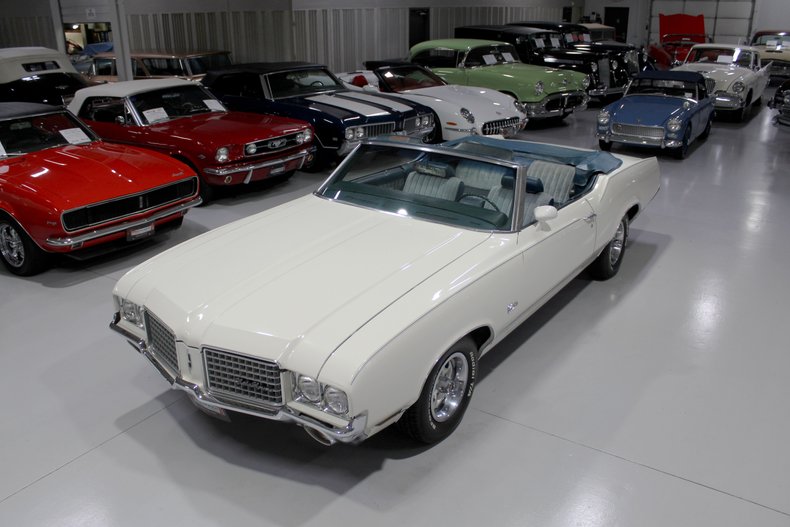 This 1971 Oldsmobile Cutlass Supreme is a nicely preserved, muscle car convertible that would make anyone a great summer cruiser! For many years, Oldsmobiles were known for their distinctive and elevated exterior trim, very plush interiors, and fantastic "creature comfort" options, which gave the GM marque a luxurious reputation. Oldsmobiles were nicer than a Chevrolet or a Pontiac, though not as flashy as a Cadillac. Introduced on September 10, 1970, the Cutlass Supreme was the highest-trimmed intermediate level Oldsmobile in its 1971 passenger car lineup, sitting above the standard Cutlass and mid-range Cutlass "S". The 1971 Cutlass Supreme also marked the second to last year a convertible was offered in a Cutlass until it was revived in the 80s. With standard equipment such as a woodgrain dash and a deluxe steering wheel, along with a "Rocket" V8 engine, it was clear that Olds was targeting younger buyers who were seeking a car that was luxurious and sporty yet affordable. That combination of sportiness, elegance, and affordability worked wonders for Oldsmobile since the Cutlass Supreme was the best-selling trim level in the Cutlass lineup, and the Cutlass Supreme Convertible was the best-selling convertible for Oldsmobile in 1971 with over 10,000 produced. This particular Cutlass comes to us from a southern-based collector who was said to have owned the car for over 30 years. Under the hood on this '71 Cutlass Supreme is a 350 Cubic Inch "Rocket" V8 paired with a single 4 barrel carburetor that pushed out 260 horsepower when new. The 350 Rocket V8 is backed by a Turbo Hydra-Matic 3 speed automatic transmission ensuring that just about anybody can take this convertible for a spin around the block. Exhaust exits the Rocket V8 via a dual exhaust setup that gives this Cutlass Supreme a nice throaty sound. Being that this convertible is an Oldsmobile, and a higher-trimmed model at that, it comes loaded with options! With power brakes, bringing this classic Olds to a stop is made much easier. Power steering is also a welcome addition since it makes maneuvering this Olds in and out of tight spaces at the local drive-in or car show an absolute breeze. Speaking of a "breeze," this Cutlass Supreme is also equipped with factory air conditioning that has been converted to an R134a setup so that you can stay cool even on the hottest summer days. Riding on a set of BFGoodrich radial tires that are wrapped around a set of Super Stock mag-style wheels, this 1971 Oldsmobile has that muscle car look and a fantastic ride. The exterior on this 1971 Cutlass has been refinished in a beautiful Cameo White that is accented by light blue pinstripes. The white vinyl power convertible top is in fantastic condition and is operated with ease via the simple flick of a switch. The interior on this 1971 Oldsmobille is gorgeous! The front and rear bench seats are upholstered in blue vinyl with blue velour inserts. The woodgrain dash, door panels, and deluxe steering wheel all look great as well and appear to be in their stock configuration. The dash is equipped with a 120 MPH speedometer, fuel gauge, and clock, as well as indicator lights for the parking brake, engine temperature, oil pressure, and generator charging. The original radio has been upgraded to a Pioneer AM/FM/Cassette system so that you can listen to all of your tunes while cruising down the road. Whether you're buying your first classic car or you're adding to your existing Oldsmobile collection, this 1971 Oldsmobile Cutlass Supreme would make an excellent choice. Give us a call today!