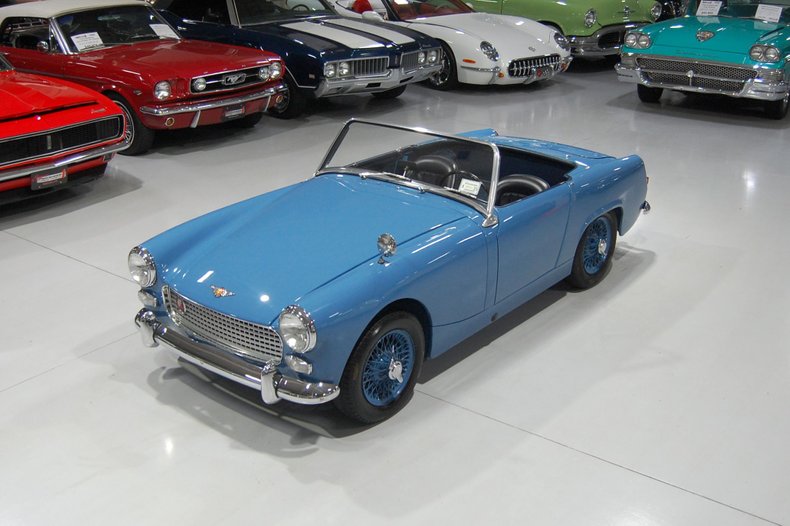 This 1964 Austin-Healey Sprite MKII I is a gorgeous, frame-off restored convertible with California history and extensive documentation. The origins of Austin-Healey date back to the early 1950s. Austin, which was owned by the British Motor Company, was mostly known for its low-cost small-footprint sedans, especially here in the United States. Donald Healey got his start first as a rally driver in the 1920s before later transitioning into a technical director role at Triumph. After World War II, Mr. Healey got into the car building business under his own name but due to lack of adequate funding, he often partnered up with other manufacturers and used their parts. In 1952, the British Motor Company was looking to shake its underwhelming reputation and held a design competition for a new sports car. The Healey designed "100" won the competition and became known as the Austin-Healey. By 1958, the desire arose for a lower cost sports car for the "every man" and the British Motor Corporation delivered when it introduced the Austin-Healey Sprite in Monaco, just days before the famous namesake Grand Prix race. In the early sixties, the Mark II Sprite was released as was the companion MG Midget, leading to the nickname given to this pair of cars, the "Spridget." The Sprite Mark II featured freshened-up trim among other minor updates. This particular Mark II underwent an extensive documented restoration a few years ago and it participated in the Copperstate 1000 Rally. Powering this Sprite is an upgraded 1,275 CC Inline 4 Cylinder engine paired with dual 1 barrel SU carburetors. The 1.3 Liter Inline 4 is mated to a 4 speed manual transmission that makes this little Austin Healey an absolute blast to drive. Exhuast exits via a single exhaust setup that gives this cute convertible a great sound. The chrome and brightwork around the exterior of this Austin-Healey is in excellent condition. With front disc brakes, bringing this little Healey to a stop is made much easier especially with all that extra power under the "bonnet." This Mark II Sprite rides on a set of color-matched wire wheels paired with Pirelli radial tires, which give this car a classy look and even better ride. The dark blue Haartz cloth convertible top is in fantastic condition, as is the removable convertible top frame and black vinyl tonneau cover. The exterior on this Austin Healey has been refinished in a beautiful Isis Blue, which completes the exterior look of the car. The interior on this Sprite MKII is absolutely stunning! The bucket seats have been reupholstered in a gorgeous dark blue leather. The dark blue carpeting also appears to have been recently replaced and is in excellent condition. The steering wheel, blue leather padded dash, and the blue leather door panels are all in fantastic condition as well and appear to be in their stock configuration. The dash is equipped with a 120 MPH speedometer, 7,000 RPM tachometer, fuel gauge, and oil pressure/water temperature combo gauge. Whether you're adding to your existing Spridget collection or you're buying your first classic car, this 1964 Austin-Healey Sprite MKII would make an excellent choice. Give us a call today at 763-428-7337!