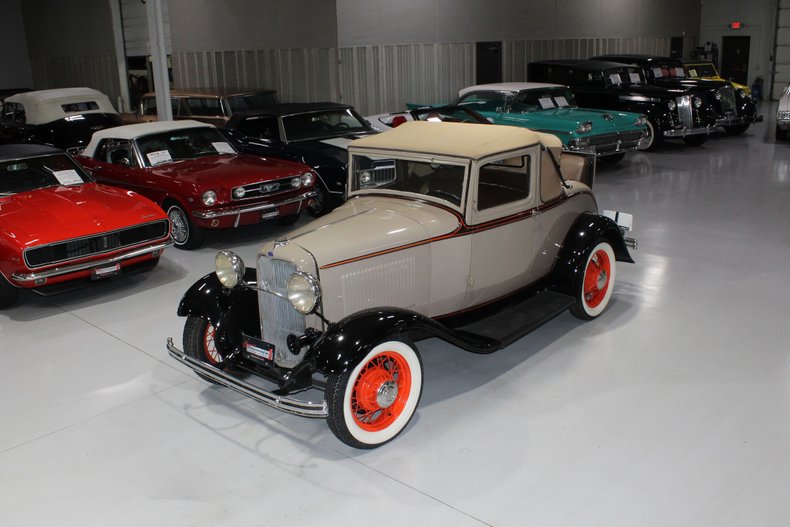 This 1932 Ford Model 18 Sports Coupe sports one of the rarest body styles among '32 Fords and this particular one is quite handsome. When Henry Ford introduced his latest creation in March of 1932, it was a long time coming and would end up changing the trajectory of American automobile design and history. See, Henry was beginning to sense that his slowing sales were not entirely due the poor economic conditions at the time but rather his competition at General Motors (i.e. Chevrolet) and Chrysler (i.e. Plymouth) were catching up to the lead his namesake Ford Motor Company had built with the Model T and Model A. In particular, both Chevrolet and Plymouth were selling 6 cylinder engines whereas the Model A was still using the reliable Ford 4 cylinder. So, in the Summer of 1930, Henry Ford secretly sent some of his most talented experimental engineers to his Greenfield Village shop in Dearborn, Michigan to begin designing a small V8 that could be easily and inexpensively produced for the masses. In fact, this covert operation was so secret that not even Henry's son and then FoMoCo president, Edsel Ford, was initially aware of Henry's plan. Eventually, Edsel would see Henry's V8 in June 1931 and the Fords would proceed with production. On December 7, 1931, Model A production was stopped and the wheels on Ford's $300 million gamble were officially rolling. By March 1932, Ford's new Model 18 was available for public viewing and the new design was well-received. From the new radiator shell with that iconic slight "V" shape and the vertical bars on the grille to the new-look engine turned dash, the 1932 Fords were gorgeous both inside and out. As the years went on, the '32 Fords became desirable hot rod projects when the vets returned from the War with their V8 engines, great looks, and, at the time, relatively inexpensive price tags. Today, the '32 Ford remains one of the most iconic hot rods which is why finding one, like this one, still in its stock configuration a harder and harder proposition. This particular 1932 Ford Model 18 comes to us from a southern based collector who cared for the car for 15 years. Under the hood on this '32 Ford Coupe is 221 Cubic Inch Flathead V8 engine paired with a single barrel carburetor that was said to have created 65 horsepower back in 1932. The 221 "Flatty" is backed by a 3 speed manual transmission that is shifted using a floor mounted standard shifter. Exhaust exits the Ford V8 via a single exhaust setup that is outfitted with a chrome deflector tip on the rear exhaust pipe. This all steel Model 18 rides on a set of wide whitewall bias-ply tires that are wrapped around painted wire wheels with chrome Ford V8 hubcaps that give the car a gorgeous pre-war appearance. This '32 Sports Coupe is also equipped with a matching rear-mounted spare that adds further to the classy look of this early V8 Ford. The all steel body on this 1932 Model 18 Sports Coupe has been refinished in Cherokee Grey with Winterleaf Brown beltline molding accented by tasteful burnt orange pinstriping and black painted all-steel fenders. Of course, this Sports Coupe is outfitted with a beautiful light beige canvas fixed soft top with black painted Landau bars, all of which are in wonderful condition and complete the exterior look of this classic Ford. The interior on this 1932 Ford is delightful! The front bench seat has been reupholstered with brown vinyl, as has the rumble seat in the rear. The brown vinyl door panels, painted dash with engine-turned aluminum accented instrument panel, beige rubber floor mat, and steering wheel all appear to be in their stock configuration and are in fantastic condition. The dash is equipped with a 90 MPH speedometer, oil pressure gauge, and amp gauge.