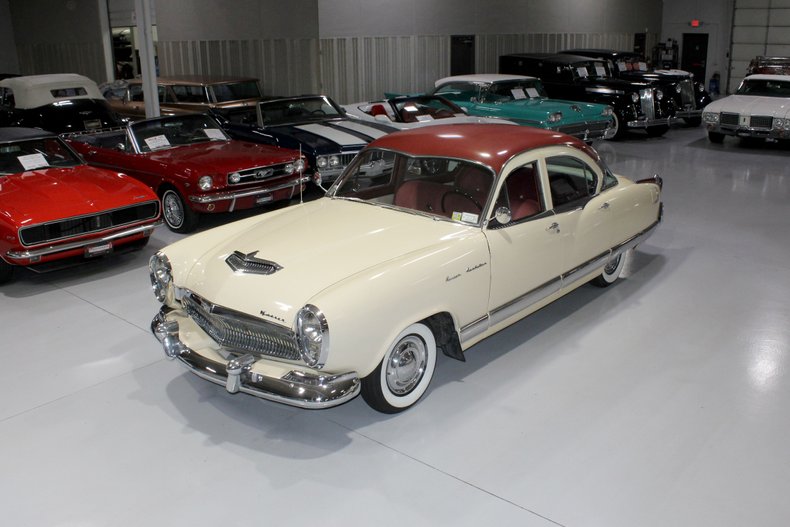 This 1954 Kaiser Manhattan is a nicely preserved 4 door sedan from the fifties with a unique look and that runs and drives great! After the conclusion of World War II the demand for cars among the American public was of great need. See, automobile sales and production ceased in early 1942 so that the auto manufacturers could dedicate all of the time, materials, and know-how to the American war effort. When the war ended in 1945, civilian automobile manufacturing was permitted to resume however, most of the 1946 models were fabricated using the same tooling of the pre-war 1942 models with only mild styling updates. That is, except for the newest American automobile maker, Kaiser-Frazer. Formed as a joint venture between Henry J. Kaiser (a famed American shipbuilder and industrialist) and Joseph W. Frazer (a notable American automotive industry executive), Kaiser-Frazer was the first American company to market a completely new automobile after the War. Kaiser-Frazer's new designs proved to be an immediate success with the infant company selling over 70,000 units of its very first production vehicle. However, Kaiser-Frazer's early sales success was short-lived since the Big-Three Detroit automakers began selling their own new post-war designs at better prices than Kaiser could compete with. After Kaiser was bailed out by the federal government in 1949, they hired automotive design visionary Howard "Dutch" Darrin to breath new life and inspiration into Kaiser-Frazer's automobile designs. While Darrin's innovative early 50s designs across Kaiser's product line were critically speaking well-received, the company's financial woes continued. In fact, much like the remaining independent American manufacturers such as Hudson and Nash (who merged to form American Motors) and Studebaker and Packard (who also merged around this time), Kaiser sought to revitalize its finances by acquiring Willys in 1954. Nonetheless, Kaiser was on its last legs with production slumping to 5,818 units. Introduced on February 3, 1954, the Kaiser Manhattan sported a new-look "Jet Airscoop" grille that was said to have been inspired by Buick's XP-300 concept car. The headlights were also revamped, outfitted with a hooded look and surrounded by glitzy trim. At the tail end of the car, a new wraparound rear window was added as was an innovative new taillight/turn signal treatment that can be seen from both the side and the rear of the car. While the 1954 Manhattans had an imaginative appearance, a mere 4,325 were produced and Kaiser-Frazer's American operations ceased in June of 1955. This particular 1954 Manhattan is believed to have been a 2 owner example with both of the previous owners being great stewards of this interesting piece of American automotive history. Under the hood on this '54 Kaiser is 226.2 Cubic Inch Continental Flathead Inline 6 Cylinder engine paired with a Carter single 2 barrel carburetor that was said back in 1954 to push out 118 horsepower. The 226 Continental Inline 6 is hooked up to a Hydra-Matic Automatic transmission ensuring that anybody can take this eccentric 50s cruiser for a spin around the block. The chrome and brightwork around the exterior of this Kaiser Manhattan is in wonderful condition, especially the "Jet Airscoop" grille and bumpers. This Manhattan rides on a set of 4 whitewall bias-ply tires paired with a set of full Kaiser wheelcovers that add to the classic fifties look of the car. The exterior of this Kaiser has been refinished in a beautiful two-tone paint scheme consisting Copperdust burgundy over Palm Beach Ivory. The interior on this 1954 Manhattan looks great! The front and rear bench seats have been reupholstered in Copperdust fabric accented by Ivory buttons. Ivory vinyl covered full-length padded dash, ivory vinyl/copperdust cloth covered door panels, and steering wheel all appear to be in their stock configuration and are in great shape! The dash is equipped with a 120 MPH speedometer, temperature gauge, and fuel gauge, as well as a push-button AM radio and clock. Whether you're adding to your existing collection of classic cars from independent manufacturers or you're buying your first classic car, this 1954 Kaiser Manhattan would make a wonderful choice. Give us a call at 763-428-7337!