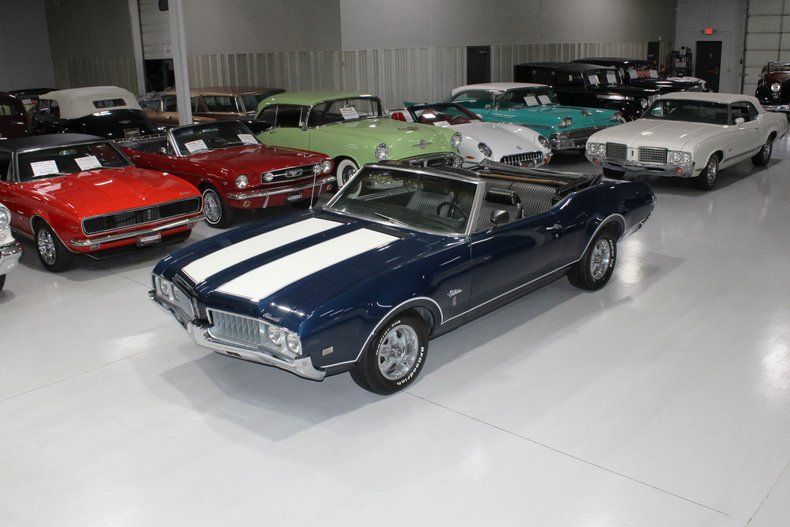 This 1969 Oldsmobile Cutlass Convertible is a nicely restored, easy to drive muscle car that was enjoyed for the last 40 years by its southern-based owners. By the late 60s, the muscle car era was in full-swing and American automakers continued to capitalize on the standard muscle car formula by putting big V8 motors into small and intermediate sized cars to generate substantial performance. In 1969, Oldsmobile offered three series of vehicles in its intermediate line, the F-85, the Cutlass, and the 4-4-2, with the Cutlass sitting above the entry level F-85 but was more affordable than the performance-oriented 4-4-2. The styling on the 1969 Cutlass was also mildly revised from the previous year's design and featured a meaner looking front end with new headlights and split grille design. 1969 was also a banner sales year for the GM marque as it had overtaken Plymouth to claim the fifth place spot on the best-selling list of automakers in America. This particular '69 Cutlass comes to us after spending the last 40 years in the south, previously owned by fantastic documentarian collectors. A numbers matching 350 Cubic Inch V8 engine is paired with an upgraded Edelbrock Single 4 Barrel Carburetor with exhaust exiting via a throaty dual exhaust setup. The matching numbers 350 Olds V8 is mated to a TH350 Automatic Transmission that makes this Cutlass Convertible an absolute joy to take on a cruise. Being an Oldsmobile, this Cutlass comes loaded with options! With power steering, getting in and out of tight spaces at car shows or the local drive-in is a breeze. With power brakes, bringing this Olds muscle car to a stop is much easier as well. The black vinyl power convertible top works great and is operated easily with a single switch mounted under the dash. The chrome and brightwork around the exterior of this Cutlass is in wonderful condition, some of which appears to have been recently re-plated or replaced. This Oldsmobile rides on a set of Super Stock II wheels with raised letter BFGoodrich Radial T/A tires, which gives this car a classic muscle car look and a much improved ride. The exterior has been refinished in a gorgeous Trophy Blue basecoat/clearcoat along with white W42-style dual stripe hood and trunk stripes, completing the exterior look of this convertible. The interior on this Cutlass is marvelous! The front bucket seats and rear bench seat have been correctly reupholstered in black vinyl. The dash, door panels, and steering wheel all appear to be in their stock configuration and show nicely. The dash is equipped with a 120 MPH speedometer, fuel gauge, clock, and AM/FM radio along with indicator lights for the generator, oil pressure, engine temperature, and the parking brake. An 8,000 RPM Sun Super Tach II tachometer, Sunpro oil pressure gauge, and Sunpro temperature gauge has been tucked neatly under the dash as well for improved reporting while cruising. Whether you're buying your first classic muscle car or you're adding to your Dr. Oldsmobile collection, this 1969 Oldsmobile Cutlass Convertible would make an excellent choice. Give us a call today at 763-428-7337!