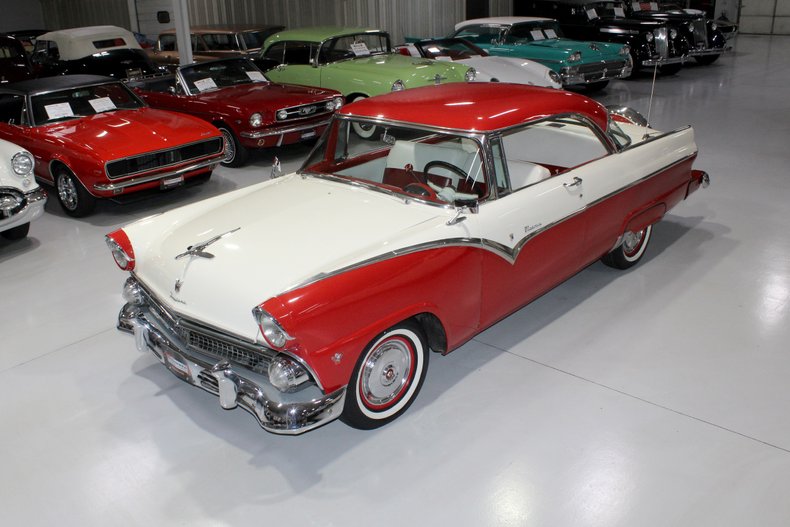 This 1955 Ford Fairlane Victoria is a nicely running and driving 50s cruiser with a stand-out look and California history. 1955 marked a major inflection point for the Ford Motor Company. Across all passenger car lines, Ford revised the style of its cars both inside and out. On the exterior, the new 1955 Fords sat lower, were slightly longer, and appeared flatter than the previous generation of Fords. Also significant in the passenger car line was the introduction of the Fairlane, the top-of-the-line passenger car series that replaced the Crestline series. Of course, the name "Fairlane" came from the Ford Family's esteemed "Fair Lane" estate. The interiors were also revamped in the 1955 Fords including new instrument panel styling that sat below the backlit speedometer that was carried forward from the previous year models. On the outside, the new Fairlane also featured new chrome-trimmed hooded "eyebrow" headlights, a new concave grille with round driving lights, and tons of new elevated trim, including the iconic V-shaped side trim that ran the entire length of the car at the belt line giving the '55 Fords a nice visual break. All of these style changes to the 1955 Fords helped Ford sell more cars in 1955 than the previous year, especially its high-end model with the '55 Fairlane outselling the '54 Crestline by nearly 400,000 units. Under the hood on this '55 Ford is a 272 Cubic Inch V8 engine paired with an upgraded Edelbrock single 4 barrel carburetor. Exhaust exits the 272 V8 via a dual exhaust setup that gives this 1955 Fairlane a nice throaty sound. The 272 V8 power plant is hooked up to a Ford-O-Matic Automatic Transmission, ensuring that just about anybody can take this classic Ford Victoria for a spin around the block. This 1955 Ford sports several welcome upgrades! The original 6 volt electrical system has been upgraded to a 12 volt system enhancing the overall reliability of this nearly 70 year old automobile. The tires have also been upgraded to wide whitewall radials (accented by a set of full wheelcovers) which maintain the classic look of this '55 Ford while improving the ride going down the road. A pair of chrome outside mirrors is a welcome addition as well and help you maneuver in and out of tight spaces wherever you may be. With color matched fender skirts and a rear-mounted continental kit, this 1955 Ford has that classic 50s look. The exterior of this 1955 Fairlane Victoria has been refinished in an eye-catching two-tone paint scheme consisting of Snowshoe White over Torch Red, which completes the exterior look of the car. The interior on this '55 Fairlane Victoria looks great! The front and rear bench seats have been reupholstered in Red and White Vinyl with White buttons to accent. The dash, vinyl wrapped steering wheel, and door panels maintain a nice period look and match the overall stock look of the car. The dash is equipped with a 120 MPH speedometer, temperature gauge, and fuel gauge, along with indicator lights for oil pressure and generator charging. An AM radio, clock, and controls for the "Ford Magic Aire System" are are correctly mounted in the center of the dash as well. Whether you're looking to buy your first classic car or you're adding to an existing collection this 1955 Ford Fairlane Victoria would make a wonderful choice. Give us a call today at 763-428-7337!