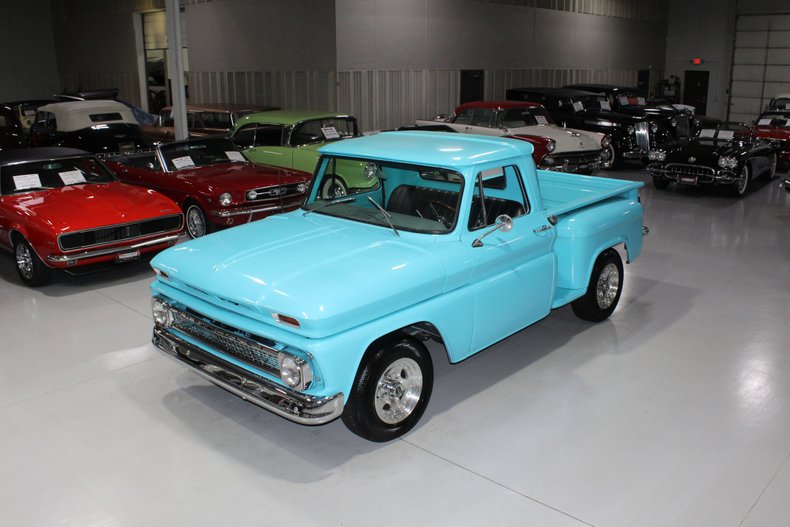 This 1966 Chevrolet C10 1/2 Ton Stepside Pickup is a great entry-level classic pickup truck with several tasteful upgrades. 1966 was a significant year in Chevy truck history with the GM marque producing its 10 millionth Chevrolet truck during that year. Talk about an amazing milestone! 1966 also marked the end of an era in the Chevrolet truck world since '66 was the final year of the "Pinch Waist" body style that debuted back in 1960. The 1966 Chevy pickup trucks were left virtually unchanged from the previous year models with the exception of a minor change in emblems on the side of the trucks. Additionally in 1966, due to the new government safety regulations, seat belts, a rearview side mirror, windshield wipers and washers, and back-up lights became standard equipment. Moreover, 1966 Chevy trucks sold in California were sold with pollution control equipment as well. Perhaps the most significant addition to Chevy's '66 truck lineup was the inclusion of the 327 V8 engine which was an option for truck buyers back in 1966. In total, the half-ton C10 model was by far the most popular in 1966, with the C10 comprising around 75% of the Chevrolet trucks sold that year. Under the hood on this C10 Pickup is a 327 Cubic Inch V8 engine paired with a Holley Single 4 barrel carburetor. The NOM 327 V8 is hooked up to a TH350 Automatic Transmission ensuring that just about anybody can take this baby for a spin around the block. Exhaust exits through a dual exhaust setup that gives this classic Chevy a nice throaty sound. With power steering, maneuvering this Stepside in and out of tight spaces at the local car show or drive-in is made much easier. The exterior of this Chevy Pickup Truck has been refinished in Light Blue, helping this truck stand out of the crowd. Riding on a set of 235/70R16 radial tires on American Racing wheels, this '66 C-10 Pickup has a great look and even better ride. The interior on this 1966 Chevrolet looks great! The bench seat has been reupholstered in black vinyl with grey accents. The dash, door panels, and carpeting appear to be in a mostly stock configuration and have a great look. The steering column has been upgraded to a tilt steering setup and the steering wheel itself has been tastefully upgraded as well. The dash is equipped with a 100 MPH speedometer and fuel gauge, along with indicator lights for oil pressure, generator charging, and temperature level. The radio has been upgraded to a Pioneer AM/FM/CD entertainment system so that you can listen to all of your tunes while cruising down the road. A trifecta of auxiliary Equus gauges, including gauges for oil pressure, temperature, and volts, have been mounted neatly under the dash. Whether you're adding to you existing Chevy collection or you're buying your first classic pickup truck, this 1966 Chevrolet C10 1/2 Ton Stepside Pickup would make an excellent choice. Give us a call today!