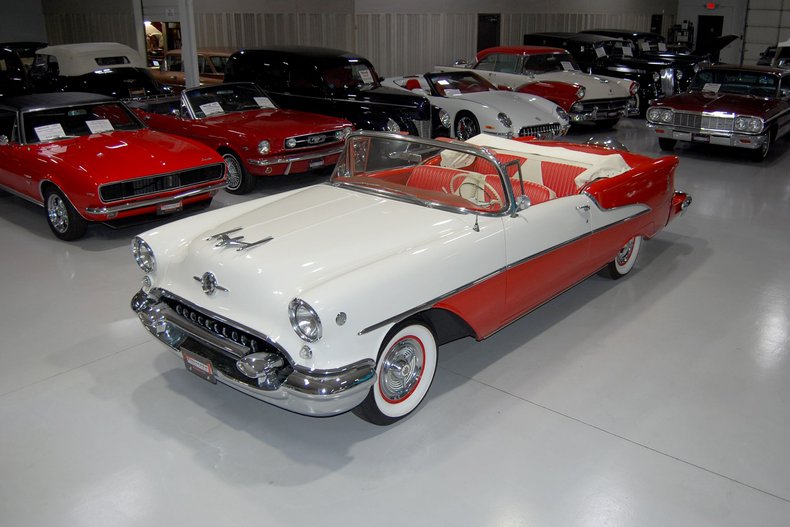 This 1955 Oldsmobile Super 88 Convertible is a beautifully restored, stock example of Oldsmobile's sporty convertible. When Oldsmobile introduced its Super 88 to consumers in January of 1951, it was intended to be a mid-level model for the GM marque sitting between the entry-level 88 and the top-of-the-line 98 models. From its 1951 debut through the mid-50s, the Super 88 was a massive sales success for Oldsmobile and some even called it Oldsmobile's "bread and butter" model. In 1955, Oldsmobile offered 2 models with convertibles, the Super 88 and the 98. The biggest change for the Super 88 in '55 was the fact that Olds slipped its more powerful 202 horsepower engine from its 98 model into an 88 body to create the 1955 Super 88. With their shorter wheelbase and upgraded engine the Super 88 became the sportiest Oldsmobile model in 1955 yet the convertibles are rarest '55 Olds models with only 9,007 produced. Nonetheless, 1955 was a banner year for Oldsmobile with the General Motors brand producing over a half million vehicles. This particular Super Eighty-Eight Convertible comes to us long-term owner who cared for the car for over 20 years and who purchased it out of California. Under the hood on this Super 88 is a 324 Cubic Inch "Rocket" V8 engine paired with a single 4 barrel carburetor that pushed out 202 horsepower back in its day. The 324 Rocket V8 is mated to a smooth-shifting Hydra-Matic Automatic Transmission that allows anybody to take this '55 Olds for a spin around the block. This Oldsmobile Super 88 has some truly great options! Power steering, which was a $120 option back in 1955, improves the overall driving experience in this Olds and makes getting in and out of tight spaces at the local drive-in or car show an absolute breeze. With "Pedal-Ease" power brakes, bringing this nearly 3,800 pound convertible to a full stop much easier as well. The white vinyl power convertible top is operated via an under dash switch and makes putting up and down the convertible a simple endeavor. This '55 Olds rides on a set of wide whitewall radial tires paired with full wheelcovers giving this car a classic look and an even better ride. The exterior on this Super 88 Convertible has been correctly refinished in a beautiful two-tone paint scheme consisting of Burlingame Red and Polar White, a truly eye-catching combination. Superb exterior chrome and brightwork complete the exterior appearance of this convertible. The interior on this 1955 Oldsmobile is magnificent! The front and rear bench seats have been reupholstered in beautiful Red and Ivory Vinyl. The dash, door panels, carpeting and steering wheel are all in fantastic shape as well and appear to be in their stock configuration. The dash is equipped with full instrumentation including a 120 MPH speedometer, amp gauge, temperature gauge, oil pressure gauge, and fuel gauge, along with an AM radio and clock. Whether you're buying your first classic car or you want to re-live your youth, this 1955 Oldsmobile Super 88 Convertible would make an excellent choice. Give us a call today!