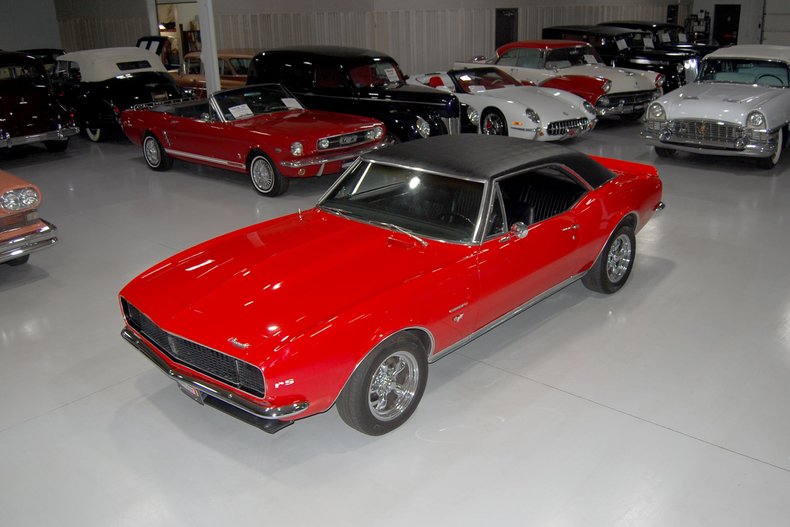 This 1967 Chevrolet Camaro RS is a beautifully restored muscle car with great options and a fantastic look! When Chevrolet debuted its new Camaro to the public on September 26, 1966, it was intended to compete directly with Ford's wildly successful Mustang along with Plymouth's Barracuda, both of which established themselves in the emerging Pony Car segment of the American car market. What made a Pony Car were features such as long hoods and short decks, coupled with a sporty feel and affordable price tag. These cars were of course targeted towards younger buyers who were looking for sportier cars that they could afford and that offered performance. At the time, Chevrolet lacked such a car, with the closest platform being the Corvair which felt a bit more European with its rear air-cooled engine and curvier silhouette and thus lacked a true American muscle car-type feel. Enter the Camaro! These first generation Camaros were almost like "building blocks" that gave customers numerous engine and powertrain options along with additional trim add-ons, including packages such as the Z28, Super Sport, and Rally Sport. With standard features such as a blacked-out front grille, single unit front headlights, and sporty bucket seats, consumers took a liking to the new Camaro and the platform became a staple in Chevrolet's lineup for many years to come. Under the hood on this 1967 Camaro is a 327 Cubic Inch V8 engine paired with an Edelbrock single 4 barrel carburetor. The 327 V8 is mated to an upgraded TH350 Automatic Transmission that ensures that anybody can take this pony car for a spin around the block. Exhaust exits the 327 block via a dual exhaust setup that gives this Camaro a nice throaty sound. This '67 Camaro is loaded with great options! Bringing this Camaro to a stop is made much easier with the addition of power front disc brakes. With power steering, maneuvering in and out of tight spaces at the local car show is also much improved as is the overall driving experience. A positraction rear end ensure that you'll keep the rubber to the pavement while driving this classic Chevy. Riding on a set of Eagle Alloy wheels paired with a set of radial tires, this first generation Camaro has a fantastic look and even better ride. This Camaro's exterior has been refinished in a beautiful Bolero Red and the top has been re-covered in Black Vinyl which gives this classic Chevrolet a stand-out look. The interior on this Camaro is stunning! The front bucket seats and rear bench seat have been reupholstered in black vinyl. The dash, door panels, steering wheel, and center console are in wonderful shape as well and appear to be in their stock configuration. The dash is equipped with a 120 MPH speedometer and fuel gauge, as well as an AM/FM/Cassette entertainment system. A pair of Auto Gage oil pressure and water temperature auxiliary gauges are mounted neatly under the dash for improved reporting while driving. Whether you're buying your first classic car or you're adding to your blue bowtie collection, this 1967 Chevrolet Camaro RS would make an excellent choice. Give us a call today!