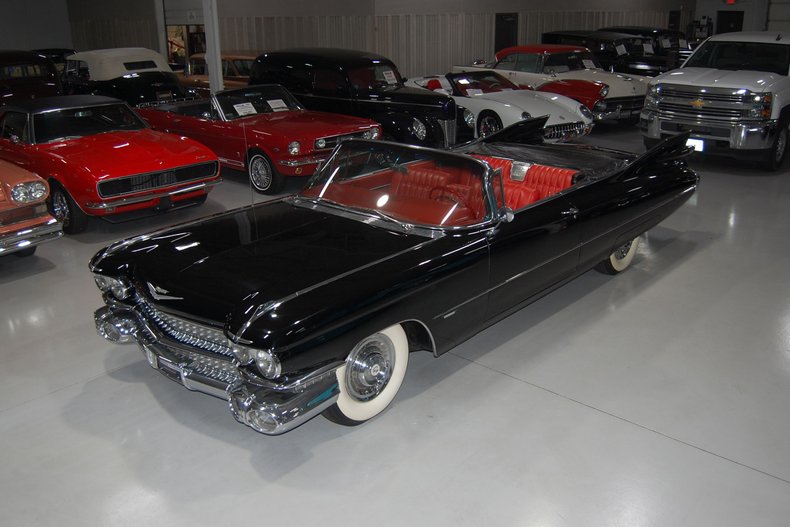 This 1959 Cadillac Series 62 Convertible is a beautifully restored '59 Cadillac Convertible and comes to us from the hand of a long term west coast collector. With their massive tail fins with dual bullet taillights, few American cars are more recognizable than the iconic 1959 Cadillac Convertibles. In 1959, Cadillac's design was truly glamorous, and made a statement that the owner of a '59 Cadillac exemplified these traits. The bullet-style front grilles sat between dual headlights on both sides and gave the car a jewel-like appearance. The high tailfins with dual bullet taillights, along with the faux grille at the rear, add to the elevated and luxurious appearance of the 1959 Cadillacs. In 1959, Cadillac offered two distinct convertibles with its top-of-the-line Eldorado Biarritz and the entry-level Series 62. Being that the Series 62 Convertibles were comparatively more affordable with an MSRP of $5,455 they outsold the Biarritz by nearly tenfold. Of the nearly 71,000 Series 62 Cadillacs produced in 1959, only 11,130 were the convertible model which made up about 15% of the total production. Under the hood on this 1959 Cadillac is a 390 Cubic Inch V8 engine paired with a single 4 barrel carburetor that pushed out 325 horsepower in its day. The NOM 390 V8 is backed by a Hydra-Matic Automatic Transmission which makes this iconic Cadillac a car that anybody can take for a spin around the block. Being that this convertible is indeed a Cadillac, it is loaded with many desirable options! With power brakes bringing this 4,800+ pound cruiser to a full stop is made much easier and improves the overall driving experience. This 1959 Series 62 is also equipped with power steering which makes maneuvering this Convertible in and out of tight spaces at the local car show or drive-in a total breeze. The white vinyl power convertible top is in wonderful condition as well and goes up and down with ease with the simple flick of a switch. Riding on a set of wide whitewall tires with full Cadillac wheel covers, this 1959 Cadillac has an iconic 50s look. The chrome and brightwork around the exterior of this Cadillac Convertible is in fantastic shape as well and shows particularly well. Refinished correctly in Ebony Black, this 1959 Series 62 look just like it did when it rolled out of the factory back in 1959. The interior on this '59 Cadillac is absolutely stunning! The front bench seat and rear bench seat have been reupholstered in beautiful red leather that provides a nice contrast to exterior look of the car. The dash, door panels, carpeting and steering wheel are all in wonderful shape as well and appear to be in their stock configuration. The dash is equipped with a 120 MPH speedometer, temperature gauge, fuel gauge, clock, and push-button AM radio. Whether you're buying your first classic car or you've always wanted to buy a '59 Cadillac, this 1959 Cadillac Series 62 Convertible would make an excellent choice. Give us a call today!