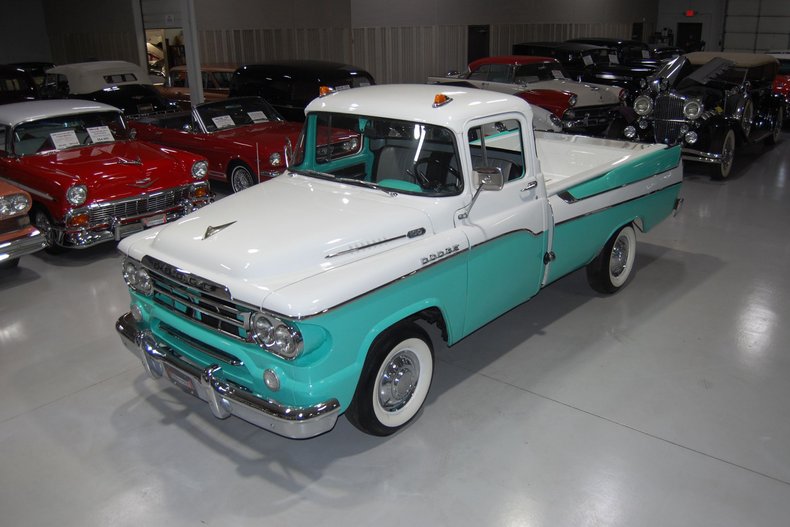 This 1959 Dodge D100 Sweptside Pickup is a nicely restored, rare example of a luxury pickup from the late 1950s. In the mid 50s, trucks were always used for "work" and cars were used for personal transportation. Trucks at the time were spartan in terms of features, style, and creature comforts since they were just for "getting the job done." So the idea of a "luxury" truck was a completely novel idea at the time. However, Chevrolet recognized that there was the potential for a niche market of folks that used their trucks for work and daily personal transportation. Accordingly, the GM marque began sprucing up their truck line with more of the comforts that customers were used to on their cars and, in 1955, they also released their Cameo which featured superb styling and more comfortable cabs. Ford was not long behind when two years later, when they debuted their '57 Ranchero in December 1956. The inspiration for Ford's Ranchero was, as the story goes, that an Australian farmer's wife had asked the local Ford plant to build "a vehicle to go to church in on a Sunday, and which can carry our pigs to market on Mondays?" However, Chrysler, the remaining Big Three American automaker, lacked its own answer to Chevrolet's Cameo and found itself behind Ford's Ranchero as well; that is, until May 1957 when Chrysler debuted its own luxury pickup with the mid-year introduction of the Dodge D100 Sweptside Pickup. Chrysler's engineers took the rear quarters and bumper from its 2-door station wagon and mounted it to its 1/2 ton long-box pickup chassis, creating a truly gorgeous truck complete with that classic Virgil Exner "Forward Look" style. In fact, the Sweptside pickups were partially hand-built by Dodge's "Special Equipment Group" The 1959 Sweptside models were slightly refreshed from the previous year with new grille treatment and were adorned with additional chrome trim above what was on the standard D100 1/2 ton trucks. The 1959 dashes were also updated in 1959, with the instrument cluster sitting entirely in front of the driver and the glovebox was shifted towards the passenger side of the dash. From 1957-1959, Sweptside production was quite limited. It is believed that around 2,500 Sweptside trucks were produced during that span, with the majority of them believed to have been built in the 1957 and 1958 model years; therefore, this 1959 D100 Sweptside a particularly rare piece of automotive history. Under the hood on this Sweptside Pickup is a 318 Cubic Inch V8 engine paired with a single 2 barrel carburetor that pushed out 205 horsepower in its day. The 318 V8 is mated to a 3 speed manual transmission that is shifted using a column-mounted "3 on the tree" shifter and a hydraulic clutch. Being that the Sweptside sat atop of the Dodge 1/2 Ton Truck hierarchy, they (like this one) came with many options as standard equipment such as chrome front and rear bumpers, chrome wheel covers, chrome bumper guards, and wraparound rear windows. This Dodge Sweptside rides on a set of wide whitewall bias-ply tires which give this pickup truck a truly classic look. The steel box, which is tucked behind the unique Sweptside rear fenders, along with the steel rear tailgate and painted wood bed are in wonderful shape as well. The exterior of this 1959 Dodge Pickup has been refinished in a beautiful two-tone paint scheme consisting of Vista Green and Sand Dune White, completing the exterior look of the truck. The interior on this special D100 is fantastic! The bench seat has been refinished in Black and Grey Vinyl and is in wonderful condition. The painted dash, door panels, carpeting and headliner show well too and have a nice stock appearance. The instrument cluster is equipped with a 100 MPH speedometer, temperature gauge, oil pressure gauge, amp gauge, and fuel gauge. An AM/FM push button radio is mounted neatly in the middle of the dash as well, between the instrument cluster and glove box. Whether you're adding to your existing Mopar collection or you're buying your first classic pickup truck, this 1959 Dodge D100 Sweptside Pickup would make an excellent choice. Give us a call today!