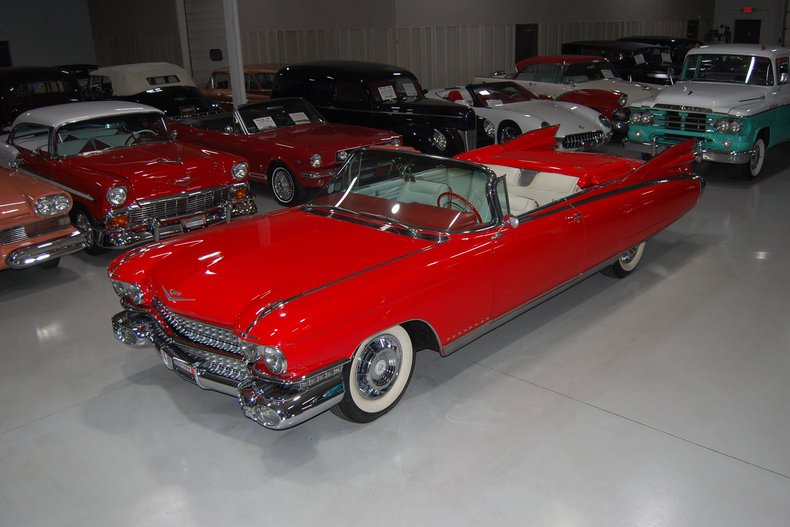 This 1959 Cadillac Eldorado Biarritz Convertible is an absolutely stunning example of Cadillac's top of the line '59 convertible and is a true American built icon! Few cars scream 50s Americana quite like a 1959 Eldorado Biarritz, and the 1959 Cadillac line featured perhaps the most spectacular style of any Cadillac ever produced. What makes the '59 Cadillacs so memorable were their extraordinary tail fins, a feature that had been incorporated into Cadillac's post-war line since 1948. From their introduction and throughout the 1950s, Cadillac's iconic tail fins had grown in size with the gigantic 1959 fins being the pinnacle. The 1959 tail fins were of course accented by a pair of the famous "bullet" taillights, which added to the flamboyant rear look of the '59 Cadillac. However the iconic tailfins and taillights were not the only changes to Cadillacs in 1959, in fact, the entire car was redesigned. At the nose, the 1959 hoods were flatter than previous years and were wider as well. The triple deck "toothy" grilles, which were specific to the Eldorado, were also updated and, since one bejeweled grille was not enough, a matching one was added below the decklid at the rear. Parking lights and turn signals were also now incorporated into the front bumpers. The 1959 side profiles were updated as well, giving the cars a more modern appearance. The Eldorado Biarritz, sitting atop of the Cadillac convertible hierarchy, featured additional trim and more standard options. With options galore and a base MSRP of $7,400, the 1959 Eldorado Biarritz was the pinnacle of 50s opulence and extravagance, and they were and continue to be extremely rare with only 1,320 produced. Under the hood on this 1959 Eldorado is a Numbers Matching 390 Cubic Inch V8 engine sitting below three dual barrel carburetors that pushed out a whopping 345 horsepower in its day. Exhaust exits the 345 hp 390 V8 via a dual exhaust setup which gives this '59 Cadillac a nice throaty sound. The 390 V8 is backed by a Hydra-Matic Automatic that ensures anybody can take this classic Cadillac for a spin around the block. Being that this 1959 Eldorado Biarritz is a Cadillac, and a top-of-the-line model at that, it is loaded with fantastic options! Power steering is a wonderful option on a car of this size since it makes maneuvering this convertible in and out of tight spaces at the local drive-in or car show a total breeze. With power brakes, bringing this 5,000+ pound Cadillac to a stop is much easier as well. The Ivory vinyl power convertible top is in fantastic condition and it goes up and down with ease and is operated using an under dash switch. When the convertible top is down, as it should be while you're cruising in this Biarritz on a nice summer day, it sits below a matching parade boot that is in superb condition and matches the exterior appearance of the car. A set of rear fender skirts add the classic 50s look of this 1959 Eldorado and they are in great shape as well. The chrome and brightwork around the exterior of this 1959 Eldo is in wonderful condition and presents well. The exterior on this 1959 Eldorado Biarritz has been refinished in a beautiful Seminole Red that gives this convertible a stand out look. A set of wide whitewall tires paired with full Eldorado wheel covers complete the exterior styling of this Cadillac. This interior on this Biarritz is exquisite! The front bucket seats and rear bench seat have been beautifully and correctly reupholstered in White Leather. The red carpeting, red painted bucket seat backs, white and red upholstered door panels, padded dash, and steering wheel are all in marvelous condition and appear to be in their stock configuration. The dash is equipped with a 120 MPH speedometer, temperature gauge, and fuel gauge, as well as a clock and AM radio. Whether you've always wanted to add an Eldorado Biarritz to your existing collection or you're buying your first classic car, this 1959 Cadillac Eldorado Biarritz Convertible would make an excellent choice. Give us a call today!