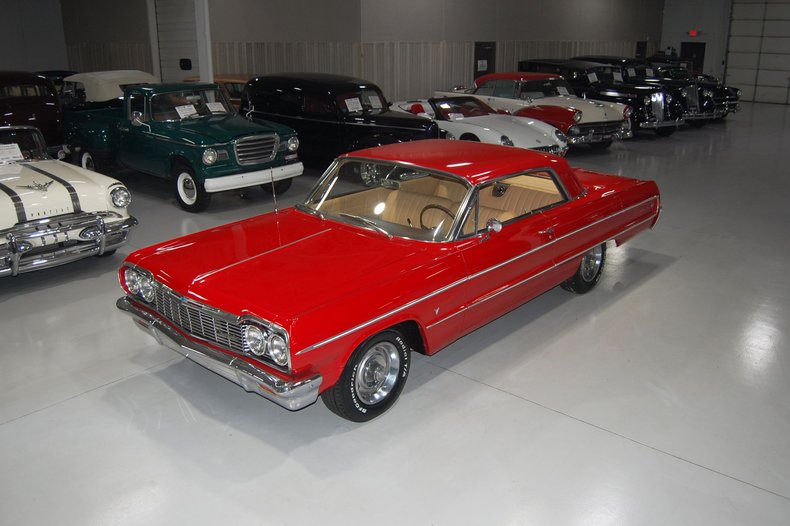 This 1964 Chevrolet Impala is beautifully restored 2 door hardtop with great options! When Chevrolet debuted the Impala in 1958, it was the top-of-the-line trim level for Chevy's Bel Air. In 1959, Chevy spun out the Impala as its own standalone model and the Impala was a Chevy mainstay for decades thereafter. In 1962, the Impala was re-designed and for the first time in the car's history the general body lines remained the same for several years. The 1964 Impala was the second-plushest passenger car in Chevrolet's lineup, only sitting below the Impala Super Sport which became its own standalone model in '64. With upgraded trim and emblems (both inside and out), dual interior dome lights, clocks, and more coming as standard equipment on the 1964 Impala they were truly a step above the entry-level Biscaynes and intermediate-level Bel Airs in Chevy's full size passenger car offerings. While the 1964 Impala was always a popular choice among hot-rodders in the later 60s and 70s, their popularity continued in the 80s, 90s, through today, due in part to their connection to modern low-rider culture. Additionally, many famous rappers, including including Snoop Dogg and Dr. Dre, have rapped about "rollin' in [their] 6-4s" in reference to the iconic lowriding 1964 Impalas. Under the hood on this '64 Impala is a 283 Cubic Inch V8 engine paired with a single 2 barrel carburetor that pushed out 195 horsepower when new. The 283 V8 is backed by a Powerglide Automatic transmission that ensures that just about anybody can take this 1964 Chevrolet for a spin around the block. Exhaust exits the 283 V8 engine via a dual exhaust setup that gives this '64 Impala a nice throaty sound. This 1964 Chevy has some fantastic options! With power steering, maneuvering this Impala 2 door hardtop is a total breeze especially when you've got to squeeze in or out of tight spots. You'll be able to stay cool even on the hottest summer days since this '64 Chevy is outfitted with under-dash Air Conditioning. Riding on a set of 225/70R15 BFGoodrich raised letter Radial T/A tires mounted on later model Rally Wheels, this 1964 Impala has a classic look and a great ride. The exterior is refinished in beautiful Riverside Red that is sure to be a standout cruising down the road. The interior on 64 Impala is superb! The front and rear bench seats, along with the door panels and headliner have been beautifully reupholstered in Saddle Vinyl. The dash and steering wheel appear to be in their stock configuration and look nice as well. The dash is equipped with a 120 MPH speedometer, clock and fuel gauge, as well as indicator lights for engine temperature, oil pressure and the generator. Outfitted with an upgraded AM/FM/Cassette entertainment system, you'll be able listen to all of your tunes while cruising down the road. The Thermo King air conditioning unit is mounted neatly under the dash as well. Whether you're buying your first classic car or you're adding to your existing blue bowtie collection, this 1964 Chevrolet Impala would make for an excellent cruiser. Give us a call today!