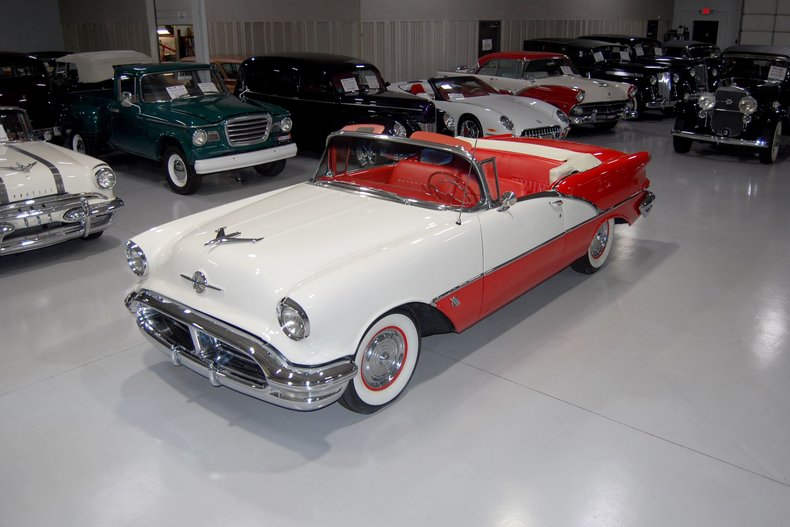 This 1956 Oldsmobile Super 88 Convertible is a stunningly restored example with great options and Rocket V8 power. On November 3, 1955, Oldsmobile introduced its 1956 lineup to its dealership network, which was coming off an impressive record-setting year for the GM marque. While sales slipped a bit in 1956, Oldsmobile was able to retain its position as the 5th best selling American automaker. The 1956 Oldsmobiles featured several stylistic revisions both inside and out. On the exterior, the '56 Oldsmobiles featured new chrome grilles that were deeply concave in design and the rear quarters were updated as well with a "swept flank" look that gave the cars a bit more 50s flair. The dashboards in 1956 were also updated from the previous year's layout and now had a more futuristic look. The Super 88 was Oldsmobile's intermediate model sitting above the entry-level 88 and the premium 98 models. For Oldsmobile in 1956, the only two models with a convertible body style were the Super 88 and the 98. However, when comparing the Super 88 to the 98, the Super 88 was considered to be a sportier car since the 98 had a longer wheelbase and was therefore more targeted at boulevard cruising. In total, Oldsmobile produced 9,561 Super 88 Convertibles making it one of the rarest Olds from 1956. Under the hood of the '56 Super 88 is a 324.3 Rocket V8 engine paired with a single 4 barrel carburetor that pushed out 240 horsepower when new. Exhaust exits this Super 88 via a dual exhaust setup that gives this convertible a nice throaty sound. A Hydra-Matic Automatic tranmission is mated to the 324 Rocket V8 ensuring that anybody can take this 50s cruiser for a spin around the block. This Super 88 is loaded with options! Power brakes makes bringing this '56 Olds to a stop much easier and improves the overall driving experience. With power steering, maneuvering this 1956 Super 88 in and out of tight spaces at car shows or the local drive in is a breeze. The white vinyl power convertible top is in fantastic condition and goes up and down effortlessly with the simple pull or push of a knob mounted neatly under the dash. When down, the power convertible top sits below a white vinyl boot that matches the exterior appearance of this fine automobile. Riding on a set of wide whitewall bias-ply tires on painted rims with full wheelcovers, this 1956 Super 88 has a classy 50s look. The chrome and brightwork on this 1956 Oldsmobile is in fantastic show-worthy condition, both inside and out. Finished in a beautiful two-tone paint scheme consisting of Festival Red and Alcan White, this '56 Olds is a true standout. The interior on this Oldsmobile Super 88 is absolutely stunning! The front and rear bench seats have been reupholstered in Red vinyl and looks as if almost no one has ever sat in this car. The dash, door panels, and steering wheel are all in wonderful condition and appear to be in their stock configuration. The dash is equipped with a 120 MPH speedometer, gas gauge, AM radio, and clock, as well as indicator lights for the generator, oil pressure, and temperature. Whether you're adding to your existing classic car collection or you're purchasing your very first classic, this 1956 Oldsmobile Super 88 Convertible would make a truly excellent choice. Give us a call today!