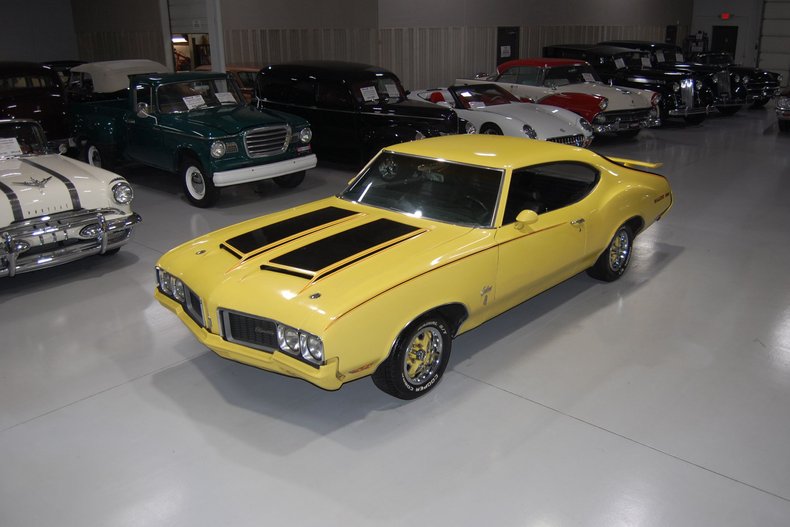 This 1970 Oldsmobile Rallye 350 is a wonderfully preserved survivor that is ready to burn some rubber! Many would agree that 1970 was the pinnacle of the muscle car era, with nearly every American car manufacturer producing an iconic muscle car of their own. Oldsmobile had a long history of selling performance-oriented automobiles dating back to the early 50s when the GM marque debuted its Rocket V8. By the late-60s Oldsmobile experienced considerable success selling its own muscle car, the Cutlass and later the 442. In 1969, Oldsmobile's advertising debuted a brilliant character "Dr. Oldsmobile," a mad scientist with Sonny Bono looks to further promote his "W-Machines" which were the high performance option packages available at that time. In 1970, after reportedly facing pressure from the insurance industry, Oldsmobile introduced its one year only performance-lite W-45 option package known as the Rallye 350. As Oldsmobile's internal sales materials described the Rallye was "a car with high visibility [...] yet its more practical engine and power train could well result in substantial savings in insurance." In other words, the Rallye 350 had an unmistakable muscle car look with Sebring Yellow paint with special black and orange body decals, a blacked out grille, matching painted Super Stock wheels, urethane-coated bumpers, sport mirrors and steering wheel, and more. But with a milder powerplant under the fiberglass hood, customers saved on their insurance premiums which were rising as more powerful muscle cars flooded the market. Ultimately, 3,547 Oldsmobiles were produced with the Rallye 350 package that could have been ordered on the spartan entry-level F-85 coupes or on the slightly more deluxe Cutlass S coupes. Under the W-25 dual intake forced air fiberglass hood on this Rallye 350 is a Rocket 350 Cubic Inch V8 engine paired with a single 4 barrel carburetor. Exhaust exits the NOM Rocket 350 via a dual exhaust setup that gives this Olds a nice throaty sound. An M21 4 speed manual transmission is mated to the NOM 350 and makes this muscle car an absolute blast to drive! The Sebring Yellow urethane-coated bumpers show some charming patina but overall are in nice shape, and the rear bumper features a pair of special notches for the flared dual exhaust exits. Being that this Cutlass S is a Rallye 350, the rear decklid is adorned with a color-keyed Sebring Yellow spoiler which was said to improve rear wheel contact at higher speeds. This Oldsmobile is equipped with a pair of sports-styled outside mirrors as well. Riding on a set of raised letter radial tires on painted Super Stock wheels, this Rallye 350 has a distinctive muscle car look and even better ride. The exterior of this Rallye 350 is finished in the iconic Sebring Yellow with black and orange body decals on the hood, front fender peaks, and rear body silhouette peak line, along with a Rallye 350 decal on the rear fender overhang, all of which show age and patina. The interior on this Oldsmobile has been wonderfully preserved! The front and rear bench seats are upholstered in black vinyl and present well. The dash, door panels, and Custom-Sport steering wheel are in great shape as well and appear to be in their stock configuration. The dash is equipped with a 120 MPH speedometer, fuel gauge, and push-button AM radio, along with indicator lights for temperature, oil pressure, generator, and parking brake. Whether you're adding to your existing Dr. Oldsmobile W-Machine collection or you're buying your first classic muscle car, this 1970 Oldsmobile Rallye 350 would make a great choice. Give us a call today!