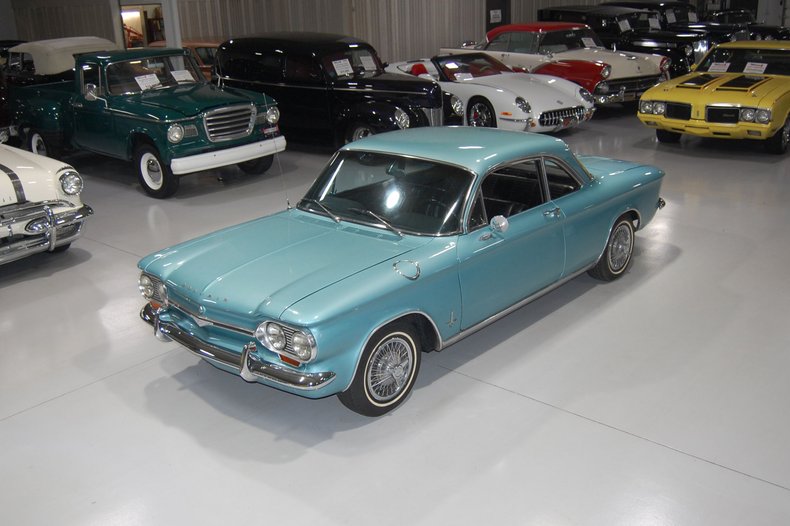 This 1964 Chevrolet Corvair is a cute little 2 door coupe that runs and drives great while sporting European-inspired styling. When Chevrolet introduced its new Corvair in the Fall of 1959, the car featured numerous engineering improvements and initially received industry-wide accolades. From a rear-mounted air-cooled aluminum engine block to the front trunk to the unconventional styling for an American car, the Corvair became the compact car for Chevrolet, which was an emerging market in the United States at the time. The Monza Series, which was introduced in April 1960, gave the Corvair more standard options, plusher interiors, and a sportier feel. The 1964 Corvair lineup debuted on September 26, 1963, and is considered the best first generation Corvair due to the numerous improvements made, such as brake and suspension updates. Interestingly, the origin for the name "Corvair" came from combining the names of two of Chevy's most successful vehicles at the time, "Corvette" and "Bel Air." Under the rear-mounted hood is an air cooled 164 Cubic Inch Flat 6 Cylinder engine paired with dual 1 barrel carburetors that pushed out 110 horsepower in its day. Anybody can take this coupe for a spin around the block since the 164 Flat Six is mated to a Powerglide automatic transmission. The aluminum 164 Flat Six sends power to the rear wheels through the rear axle and exhaust exits via a dual exhaust setup. Riding on a set of P195/70R13 thin whitewall radial tires with wire wheel covers, this Corvair has a great look and even better ride. The exterior has been refinished in a beautiful Azure Aqua, completing the exterior appearance of the car. The interior on this Corvair has a nice classic look. The front bucket seats and rear bench seat have been correctly reupholstered in black vinyl. The dash, door panels, carpet, and steering wheel are in very nice shape as well and appear to be in their stock configuration. The dash is equipped with a 100 MPH speedometer, fuel gauge, and AM/FM radio. Whether you're buying your first classic car or you're adding to your existing collection, this 1964 Chevrolet Corvair would be an excellent choice. Give us a call today!