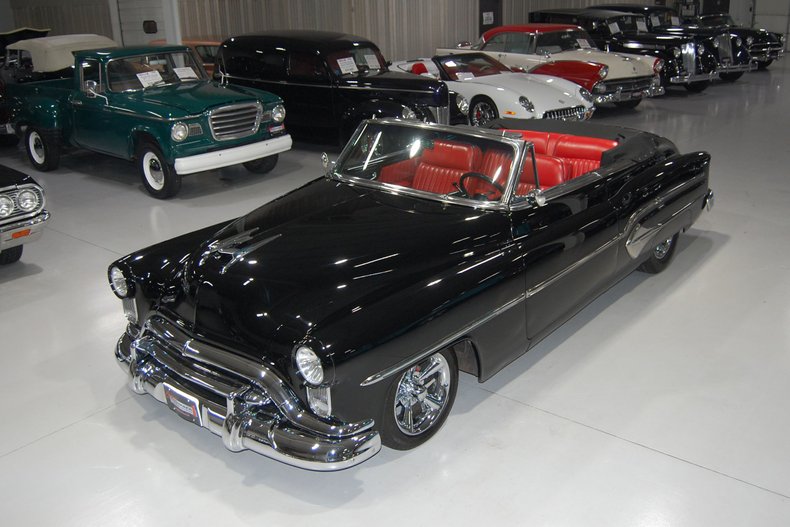 This 1951 Oldsmobile Super 88 Convertible is a stunningly restored, well-options street rod that is ready for some serious cruising. When the Super 88 made its initial debut in Oldsmobile dealer showrooms in January 1951, it was positioned as the mid-level Olds model situated between the now entry-level 88s and the top-of-the-line 98s. Of course, amongst the GM marques in '51, the Oldsmobiles were more plush than the Chevrolets but not quite as extravagant as a Buick or Cadillac. The 1951 Oldsmobiles were well-appointed automobiles with beautiful interiors, futuristic dashes, and elevated trim around the exteriors. As far as the Super 88 compared to the standard 88, the Super 88 was restyled and completely different. The Super 88s had a more deluxe looking gravel guard on the rear fenders and additional exterior trim. Unlike the 88, leather was also an option for the Super 88. Perhaps the biggest differentiator between the 88 and Super 88 was that additional body styles were available on the Super 88, and more specifically, a Convertible. In fact, Oldsmobile only offered a convertible model for the Super 88 and the 98. Interestingly, in 1951 the 98 Convertible actually outsold the Super 88 Convertible 4,468 to 3,854, respectively, making a Super 88 Convertible an exceptionally rare 50s automobile. This particular 1951 Super 88 was completely restored less than 20 years ago where it was tastefully converted into a very nice street rod by a professional builder. Under the hood on this '51 Olds is a 350 Cubic Inch V8 engine paired with a single 4 barrel carburetor. Exhaust exits the NOM 350 V8 via a set of Porter mufflers and out a dual exhaust setup that give the car a nice throaty sound. Anybody can take this 1951 Oldsmobile Street Rod for a spin around the block since the 350 V8 is backed by a TH350 Automatic Transmission. This Super 88 Convertible is totally loaded with options! With power front disc brakes, this '51 Olds has plenty of stopping power, especially with all that extra horsepower under the hood. This Super 88 Street Rod is also equipped with power steering so that you can easily maneuver the car in and out of tight spaces at the local car show or drive-in. This 1951 Super 88 Convertible is even outfitted with cruise control which improves the overall driving experience especially on long highway cruises. The black cloth power convertible top goes up and down with ease and is operated using a single dash-mounted switch. You'll stay cool even on the hottest summer days since this 1951 Oldsmobile is fitted with an R134 under-dash air conditioning setup. Riding on a set of 16" TQ Chrome Spinner Wheels with 205/55ZR16 radials in front and 265/60R16 radials in the rear, this Oldsmobile Street Rod has a great custom look and even better ride. The chrome and brightwork around the exterior of this Super 88 is in wonderful condition as well. The exterior has been refinished in a beautiful Double Black Concept by PPG paint that gives this convertible a truly classy look. The interior on this 1951 Olds is absolutely stunning! The front bucket seats, rear bench seat, and door panels have been reupholstered in Red leather accented with black piping. The front bucket seats are powered and have center folding armrests. The original steering column was replaced with a later model tilt steering column for improved comfort. The dash has a nice stock look and is equipped with a 110 MPH speedometer, amp gauge, oil pressure gauge, temperature gauge, and fuel gauge. The upgraded Eclipse AM/FM/CD/Bluetooth entertainment system ensures that you can listen to all of your tunes while cruising and was relocated from the dash to the glove compartment to further retain the stock look of the dash. Whether you're buying your first classic car or you are adding to your street rod collection, this 1951 Oldsmobile Super 88 Convertible would make an excellent choice. Give us a call today!