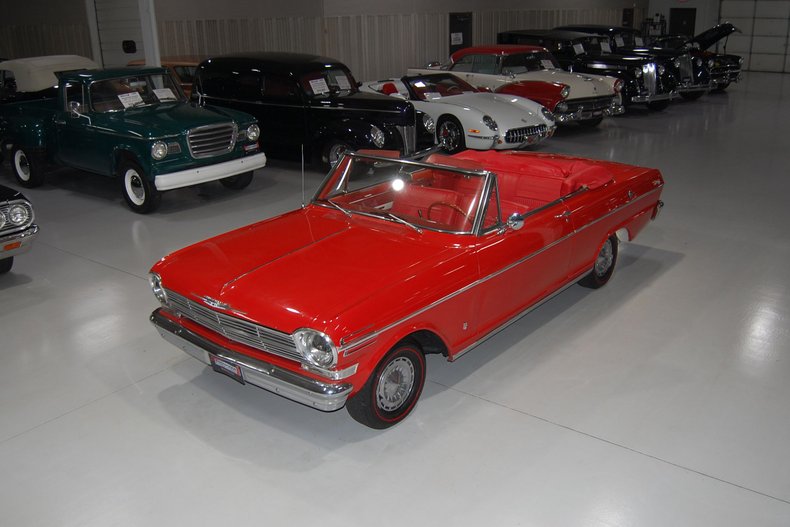 This 1962 Chevrolet Chevy II/Nova Convertible is a cute little convertible with a nice stock look. In the early 60s, the desire for more affordable, fuel efficient cars was on the upswing for American consumers. With a rising popularity of fuel efficient imports, the American automakers began to offer their own economy sized cars. Although Chevrolet offered its Corvair at the time, it's European-inspired design was deemed to be a bit too exotic for the average American and thus the GM marque lacked a proper competitor to Ford's popular Falcon. Enter the Chevy II, which was a completely new line for Chevrolet and was introduced to the public on September 29, 1961. The new Chevy II was ostensibly American, with its clean traditional-looking body lines and front engine design. The Series 400 Nova was the top-of-the-line Chevy II and was equipped with elevated exterior trim, more luxurious interiors, a standard 6 cylinder engine, and a few more bonus perks. The Nova also was the only version that came in a convertible of which Chevy produced 23,741. After producing over 325,000 Chevy IIs in total, it was considered to be an instant hit for Chevrolet. This particular Chevy II Convertible comes to us from a southern-based collector who clearly enjoyed the car while under his ownership. Under the hood on this '62 Nova Convertible is a 194 Cubic Inch Inline 6 paired with a single barrel carburetor that pushed out 120 horsepower in its day. The 194 CID 6 Cylinder engine is backed by a Powerglide Automatic Transmission ensuring that anybody can take this Chevy II for a spin around the block. Even though this 1962 Chevy was one of the smallest car in Chevrolet's '62 passenger car lineup, the addition of power brakes is always a welcome upgrade on any classic car. The white vinyl manually operated convertible top is in wonderful condition and can be tucked underneath a red boot when not in use. This Chevy II/Nova rides on a set of four 185/70R13 Redline Radial Tires equipped with full wheelcovers that give this convertible a great look and even better ride. The exterior has been correctly refinished in Roman Red paint that is sure to grab eyes while cruising down the road. The interior on this '62 Nova is fantastic! The front and rear bench seats have been recently reupholstered in red vinyl and the red carpeting was recently replaced as well. The dash, door panels, and steering wheel all have a great look as well and appear to be in their stock configuration. The dash is equipped with a 120 MPH speedometer, fuel gauge, AM radio, and indicator lights for oil pressure, engine temperature, and the generator. A pair of auxiliary gauges are also mounted neatly under the dash and consist of gauges for oil pressure and amps. Whether you're buying your first classic car or you're adding to your existing collection of Chevys, this 1962 Chevrolet Chevy II/Nova Convertible would make an excellent choice. Give us a call today!