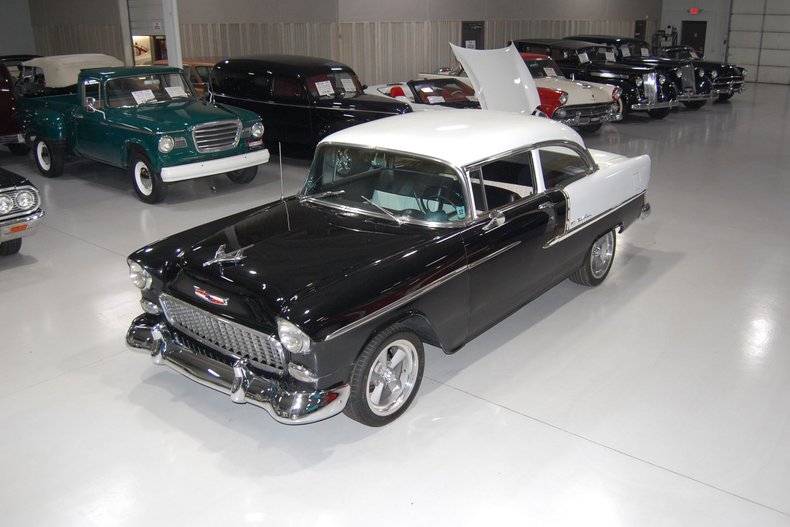 This 1955 Chevrolet Bel Air 2 Door Post has nice upgrades under the hood that make this iconic Tri-Five Chevy a great driver! When Chevy introduced its newly redesigned Bel Air in 1955, it kicked off the Tri-Five era for Chevrolet's passenger car line. With new "hooded" headlights, restyled grilles and bumpers, cutting-edge wraparound windshields, the 1955 Chevy was outfitted with numerous stylistic exterior updates. Additionally, the '55 Chevys had a bolder and squarer exterior appearance which gave the cars a more modern, classic 50s look. With respect to the interiors on the Bel Air, which sat atop the hierarchy of Chevrolet's passenger car line in 1955, they were plusher and more luxurious than entry and mid-level 150s and 210s. This particular 1955 Chevy comes to us from a southern-based collector who clearly enjoyed the car while under his stewardship. Under the hood on this '55 Bel Air is an upgraded 350 Cubic Inch V8 crate motor paired with a single 4 barrel Holley carburetor. The 350 V8 is hooked up to a TH350 Automatic Transmission ensuring that anybody can take this Tri-Five Chevy for a spin around the block. Exhaust exits the 350 crate motor via a dual exhaust setup that gives this Chevrolet a nice throaty sound. Front disc brakes were added under previous ownership providing plenty of stopping power especially with all that extra horsepower under the hood. Riding on 17" U.S. Mags Wheels with 225/45R17 radials in front and 245/45R17 radials in the rear, this '55 Bel-Air has a great look and even better ride. The exterior on this 55 Chevy has been refinished in a beautiful two-tone color scheme consisting of Onyx Black and India Ivory. A pair of dual outside chrome mirrors complete the exterior look of the car. The interior has a nice stock look to it. The front and rear bench seats have been reupholstered in Black and White Vinyl, matching the exterior look of the car. The dash, door panels, headliner and steering wheel all show nicely and appear to be in their stock configuration. The dash is equipped with a 110 MPH speedometer, temperature gauge, and fuel gauge, along with a clock and AM push-button radio. A Bosch under-dash temperature gauge was mounted neatly under previous ownership. Whether you're buying your first Tri-Five Chevy or you're adding to your collection of classic cars, this 1955 Chevrolet Bel Air 2 Door Sedan would make an excellent choice. Give us a call today!