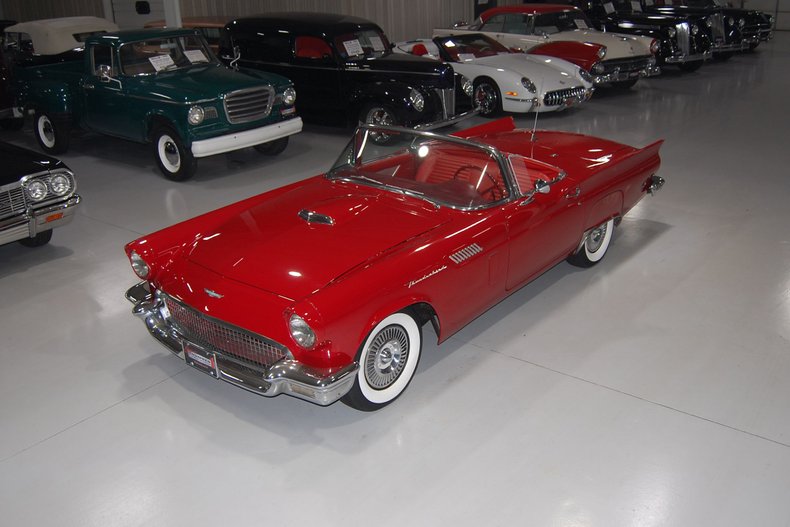 This 1957 Ford Thunderbird E-Code Convertible is a nicely optioned true E-Code T-Bird that is ready to roll! When Ford initially introduced the Thunderbird on October 25, 1954, it was deemed a flagship "personal luxury car" more luxurious than its closest competition, the Corvette. While the new T-Bird took some influences from its competition, Ford's engineers understood that the car's success required the addition of better performance-oriented features such as a V8 paired with a smoother suspension, along with more luxurious options (e.g. air conditioning and power steering, brakes, seats, windows, etc.), all of which were missing from Chevy's car. Ford's thoughtful approach to its luxury boulevard cruiser was an instant hit, far out-selling the Corvette in its respective debut, and became a status symbol among high society and Hollywood's elites. While the 1956 T-Birds were largely unchanged from the '55 version, albeit for a few refinements, the 1957 Thunderbird received a major stylistic redesign in what became a one-year only body. Gone were the continental kits from 1956 because the 1957 edition featured an elongated trunk that had more than enough space to house a spare tire along with some groceries and golf clubs. Also receiving a major facelift were the rear quarter panels, which were now adorned with sleek, slanted fins further elevating the exterior look of the new Thunderbird. 1957 was also a banner year for Ford engine performance with the company offering several new engine options for the first time ever. In 1957, buyers looking for more performance beyond the standard 292 or 312 V8s with single 4 barrels could order an E-Bird with a 312 and dual 4 barrel carburetors or an F-Bird with a supercharged 312 V8. With only 1,499 of the E-Code Thunderbirds produced in '57, they have always been and are likely to continue to be highly collectible. This particular E-Bird comes to us from a southern-based collector who clearly enjoyed the car while under his ownership. Under the hood on this T-Bird is a 312 Cubic Inch V8 engine paired with dual 4 barrel carburetors that pushed out 270 horsepower when new. The dual carbureted 312 V8 is mated to an automatic transmission ensuring that anybody can take this baby bird for a spin around the block. Exhaust exits via a dual exhaust setup that gives this convertible a nice throaty sound. This Thunderbird has fantastic options! Bringing this T-Bird to a complete stop is made much easier since it is equipped with power brakes. With power steering, maneuvering this '57 Thunderbird in and out of tight spaces is simple and improves the overall driving experience. Riding on wide whitewall radial tires with full Thunderbird turbine-style wheelcovers, this 1957 T-Bird has a truly classic look and even better ride. The exterior of this baby bird has been refinished in beautiful Flame Red paint that is sure to stand out in a crowd. A Colonial White porthole hardtop completes the exterior look of the car. The interior on this E-Code Thunderbird is absolutely stunning! The 4-way adjustable power bench seat and door panels have been reupholstered in beautiful red vinyl that matches the exterior appearance of the car. The dash, door panels, and steering wheel are in wonderful condition as well and appear to be in their stock configuration. The dash is equipped with a 140 MPH speedometer, 5,000 RPM tachometer, temperature gauge, and oil pressure gauge, along with a push-button town and country radio. Whether you're looking to add to your baby bird collection or you're looking to purchase your first classic car, this 1957 Ford Thunderbird E-Code Convertible would make an excellent choice. Give us a call today!