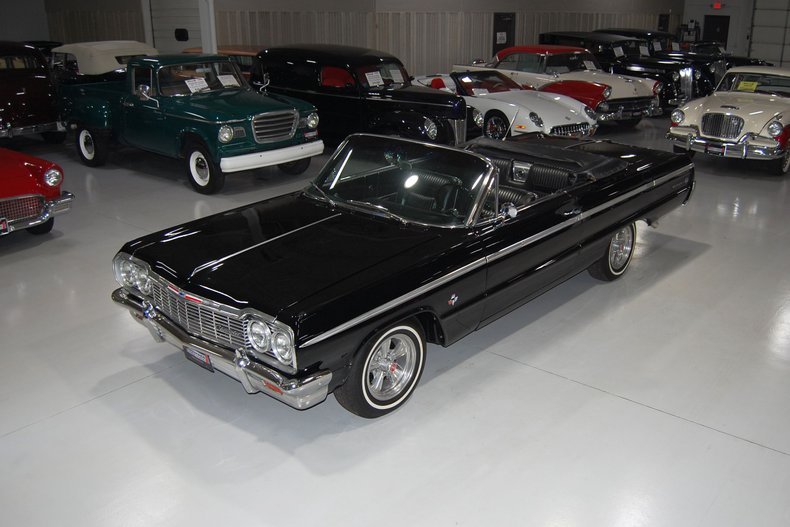 This 1964 Chevrolet Impala SS Convertible is a real deal Super Sport that produces plenty of power from its 409 V8. 1964 marked the first very time that the Impala SS was considered its own sub-series (as opposed to an option package) for the iconic Chevrolet model. The Super Sport also sat atop the Chevy hierarchy with the car being the sportiest Chevrolet passenger car with also the plushest interiors. The SS featured interiors complete with leather grained vinyl, front bucket seats, a center console with console-mounted shifter, and distinctive SS trim throughout. From the outside, there was no mistaking an Impala Super Sport since they were trimmed with special SS-only silver "swirl-pattern" anodized inserts on the decklid, along with various Super Sport specific trim on the quarters and decklid. The basic SS Impalas were priced with the basic Inline 6 Cylinder engines however Chevy offered an array of larger, more powerful V8s including the iconic 409 which was of course the title of the famous Beach Boys track off their "Surfin' Safari" album. Interestingly, the '64 Impala continued its prominence in pop culture well beyond the hot rod era of the 60s and 70s with many famous rappers in the 90s and beyond, including including Snoop Dogg and Dr. Dre, rapping about "rollin' in [their] 6-4s" in reference to the iconic lowriding 1964 Impalas. Of all of the 1.5 million cars produced by Chevy in 1964, the Impala Convertible was the rarest with only 81,897 produced with even fewer being the SS Convertible. Powering this Impala SS Convertible is a 409 Cubic Inch V8 engine paired with a single 4 barrel carburetor that pushed out 340 horsepower in its day. A 4 speed manual transmission backs up to that 409 V8 and makes this SS Convertible an absolute blast to drive. This Impala SS is absolutely loaded with options! With power steering, manuvering this Chevy muscle car in and out of tight spaces at car shows or your local drive-in is a breeze. Power brakes makes bringing this '64 Impala to a complete stop much easier, especially with all that muscle under the hood. The black vinyl power convertible top is in excellent condition and goes up and down with the simple flick of a switch. This Impala convertible is also equipped with factory air conditioning so that you can stay cool even on the hottest summer days. Riding on thin whitewall radial tires on Radir Tri Ribb wheels, this Impala has a great look and even better ride. The exterior has been beautifully refinished in Tuxedo Black, just how this convertible came back in 1964. The interior on this Impala SS is absolutely stunning! The front bucket seats and rear bench seat have been correctly reupholstered in beautiful black vinyl. The door panels, carpeting, dash, and steering wheel are in fantastic condition and appear to be in their stock configuration. The steering wheel is mounted on a tilt steering column so that you can get in and out of this Impala with ease. The dash is outfitted with a 120 MPH speedometer, 6,000 RPM tachometer, clock, and fuel gauge, as well as indicator lights for oil pressure, temperature, and generator function. The radio has been upgraded to a retro-style AM/FM/Cassette entertainment system so that you can listen to all of your tunes while cruising.