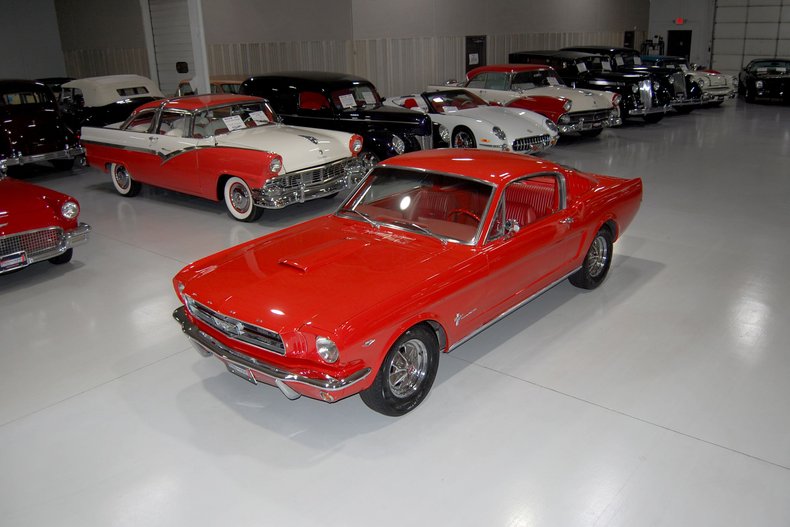 This 1965 Ford Mustang Fastback 2+2 is a beautifully restored fastback 'Stang with tasteful upgrades! Introduced officially to the public on October 1, 1964, the '65 Mustang was the first full year of production for Ford's iconic pony car. From its inception, Ford targeted the Mustang at the youth-oriented market by creating a car that was fun and sporty, all while remaining affordable to young first-time buyers. In September of 1964, the Fastback 2+2 model made its debut expanding the available Mustang body styles from two (convertible and coupe) to three. The new Fastbacks were quite popular in 1965, selling over 77,000 units in the first year of production yet that number was completely dwarfed by the standard coupe models, of which, over 400,000 units were sold. In total, the 1965 Mustang was a grand slam sales success for the Ford with the company selling over half a million Mustangs in the first full year of production. This particular 2+2 Mustang comes to us from a collector who owned the car for a number of years prior to its total restoration and then purchased it back once the restoration was completed. Under the hood is a 289 Cubic Inch V8 engine paired with a Holley single 4 barrel carburetor along with a number of MSD performance upgrades. The 289 V8 is backed by a 4 speed manual transmission that makes this Mustang an absolute blast to drive. Exhaust exits through a dual exhaust setup with trumpet tips that produces a nice throaty sound. Equipped with an electronic power steering system, maneuvering this Fastback into tight spaces at a car show or the local drive-in is much easier. Riding on a set of P215/70R14 radial tires with Styled Chrome-Plated wheels, this 2+2 Fastback has a great look and even better ride. The exterior on this Mustang has been correctly refinished in its original color scheme of Rangoon Red and is exceptionally well-done. The mild custom 2+2 interior of this Mustang is extraordinary! The front bucket seats and rear folding bench seat are outfitted in red vinyl with Pony details. The custom center console is upholstered in matching red vinyl as well and features dual cup holders. The dash, door panels, red carpeting, and steering wheel all appear to be in their stock configuration and are in fantastic shape as well. The dash is equipped with a 120 MPH speedometer, temperature gauge, and fuel gauge, along with a push-button AM radio. Whether you're adding to your stable of Mustangs or you're buying your first Mustang, this 1965 Ford Mustang Fastback 2+2 would make an excellent choice. Give us a call today!