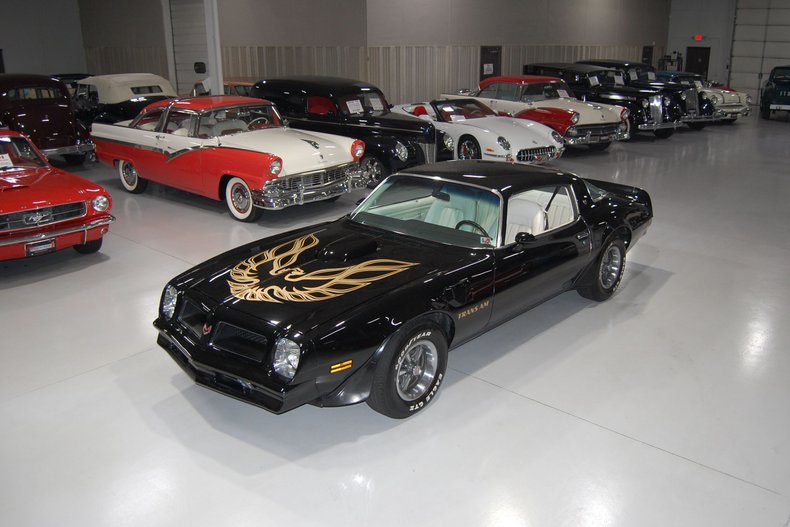 This 1976 Pontiac Trans Am is a superb survivor with outstanding options and original sales paperwork! Pontiac introduced it's Trans Am on March 8, 1969 as a high-performance option package for its pony car, the Firebird. By the mid-70s the federal government had essentially halted true American muscle car production with the introduction of pollution control regulations. Nonetheless, Pontiac continued to produce the Trans Am as the performance-oriented package for the Firebird. The next major T/A milestone occurred in 1973 when the iconic "Screaming Chicken" graphic made its debut on the Trans Am, originating from legendary Indian symbol that was modernized by stylist John Schinella. 1976 was a milestone year for Pontiac with the GM marque celebrating its Golden 50th Anniversary. In anticipation of its Golden Anniversary celebration, Pontiac debuted its Firebird line on September 25, 1975, and the line was comprised of 4 models, the base model, Esprit, Formula, and, at the top of the Firebird hierarchy, the Trans Am. The '76 Trans Am was modestly updated from the previous year featuring new body colored urethane bumpers and a new sloping front end look comprised of a twin-section grille with mesh pattern inserts. The Trans Am also came with a rear deck spoiler, shaker hood, and a few other goodies. This particular 1976 Trans Am comes to us from an east coast collector who owned the car for the past 14 years. This Trans Am is powered by a Numbers Matching L-75 455 Cubic Inch V8 engine paired with a single 4 barrel carburetor that was said to have push out 200 horsepower. The Numbers Matching 455 V8 is mated to a 4 speed manual transmission that makes this Firebird and absolute blast to drive! This '76 Trans Am is loaded with options! With power front disc brakes, this T/A has plenty of stopping power especially with all of that muscle under the hood. Driving this 1976 Pontiac is much more enjoyable with power steering and it makes getting in and out of those tight spaces at car shows much easier. Equipped with Air Conditioning, you'll stay cool while cruising even on the hottest summer days. Riding on raised letter 225/70R15 radial tires on Rally II rims in all 4 corners, this Trans Am has a great look and even better ride. Finished correctly in Starlight Black paint with a gold and black "Screaming Chicken" decal on the hood, this 76 Trans Am has excellent curb appeal. The interior on this Pontiac looks fantastic! The front bucket seats and rear bench seat are upholstered in White Vinyl and are in very nice shape. The dash, door panels, carpet and steering wheel are all in nice shape as well and appear to be in their stock configuration. The dash is equipped with a 100 MPH speedometer, 8,000 RPM tachometer, clock, oil pressure gauge, temperature gauge, volt gauge, and fuel gauge, as well as an AM/FM radio with 8-Track player. Whether you're buying your very first classic car or you're an established Pontiac collector, this 1976 Pontiac Trans Am would make an excellent choice. Give us a call today!