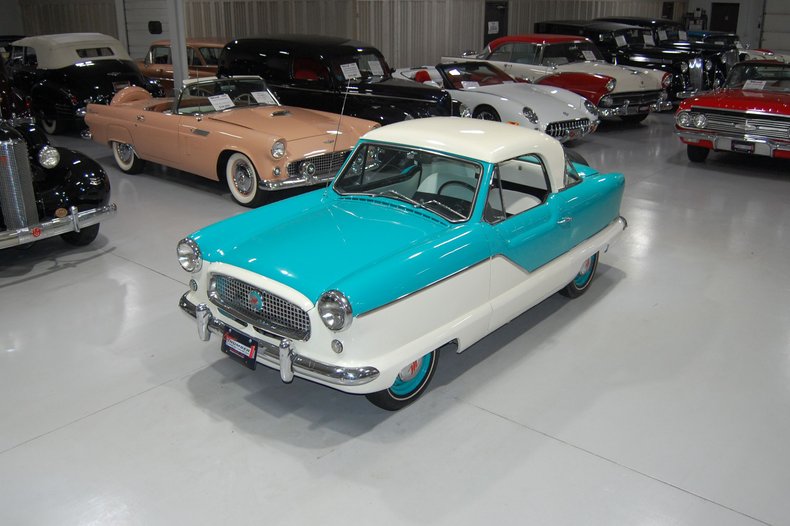 This 1961 Nash Metropolitan Coupe is a cute microcar that would make anyone a great fuel-efficient classic car. The underlying theme behind the Nash Metropolitan was that of economy, a car that could get you to and from the grocery store without using a tankful of gasoline. The resulting economy car became what was believed to be the first American sub-compact car; however, it wasn't entirely American. With a drivetrain coming from the British Austin Motor Company, the body built by Fisher & Ludlow out of Great Britain, and the cars assembled in Austin's Longbridge Plant in Birmingham, England, only the design and distribution was truly American. In 1954, after Nash and Hudson merged to form the American Motors Company (AMC), they began importing the already assembled Metropolitans and began offering them for sale through their dealer network. By the time 1961 rolled around, Metropolitan production was winding down with the final car rolling off the assembly line in April '61 and dealers selling existing stock through 1962. This particular Metro comes to us from Southern-based collectors who clearly enjoyed the car during their ownership. Powering this '61 Metropolitan is an upgraded 2.0 Liter Inline 4 Cylinder Toyota engine paired with a single 2 barrel carburetor that starts up with ease. The NOM 2.0L Inline 4 is mated to an automatic transmission ensuring that just about anybody can take this classic sub-compact for a spin around the block. Riding on P155/80R13 thin whitewall radial tires on 13" steel rims with "M" logo hubcaps, this Metro has a great look and even better ride. A rear mounted continental kit spare tire adds to the classic look of the car. Accessing your personal items stored in the trunk is easy on this 1961 Metropolitan since the trunk is accessible from the outside of the car. The exterior of this Metropolitan has been refinished in a beautiful two-tone color scheme consisting of Berkshire Green and Frost White. The front split bench and rear bench seats have been reupholstered in white vinyl with black velour inserts. The dash, door panels and steering wheel are all in nice condition as well and appear to be in their stock configuration. The dash is equipped with an 80 MPH speedometer and fuel gauge, with an auxiliary Equus oil pressure gauge and auxiliary fan switch mounted neatly under the dash. Whether you're adding to your collection or you're buying your first classic car, this 1961 Nash Metropolitan Coupe would be a wonderful choice. Give us a call today!