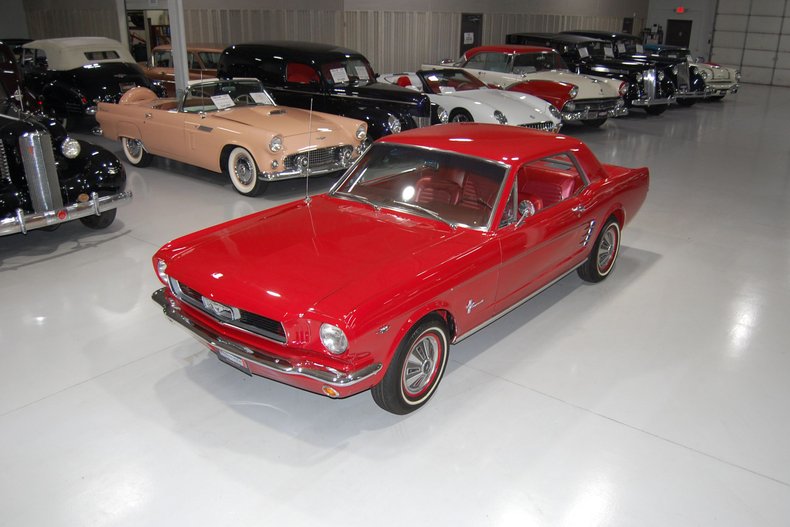 This 1966 Ford Mustang is an eye-catching summer cruiser and was a beneficiary of an extensive rotisserie restoration. Originally debuting in the middle of 1964, the Mustang was targeted at the youth-oriented market because they are sporty and fun to drive, and have a great appearance while remaining affordable for younger potentially first time buyers. And it worked! The Mustang became an instant hit across the United States, launched an entirely new sub-genre of muscle car, the Pony Car, and today remains one of the most iconic Fords ever produced. After the initial success in 1964 and 1965, the Ford Motor Company did not want to change what was working on the Mustang and thus the company made only minor stylistic revisions to the 1966 edition. In fact, Ford was advertising the 1966 Mustang with the tag line "Relax Mustang lovers. Your favorite car hasn't changed much in 1966." From the outside, likely the biggest change occurred to the grille, shifting away from the '65 honeycomb style grilles to a horizontal bar, floating Mustang look. The interior were also modestly updated with the introduction of a 5 pot instrument cluster treatment which gave the new Mustang more of a race car look and feel. With over 1.25 million Mustangs on the roads by the end of 1966, the Mustang remained a massive sales success for Ford. This particular 1966 Mustang 2 door hardtop comes to us with Arizona history and was clearly the beneficiary of an extensive rotisserie restoration. Powering this '66 Mustang C-Code is a 289 Cubic Inch V8 engine paired with a single 2 barrel carburetor that was rated at 200 horsepower back in 1966. The 289 V8 is backed by an Automatic transmission ensuring that anybody can take this pony car for a spin around the block. This particular 1966 Mustang has great options for any classic car. With power steering, getting in and out of tight spaces at the local car show or at the drive-in is made much easier and the overall driving experience is much more enjoyable. With power front disc brakes, bringing this 66 Mustang to a full stop is more simple by reducing the amount of pedal effort. The exterior has been refinished in a beautiful Candy Apple Red, just like how this car came back in 1966. The interior on this Mustang is absolutely stunning! The front bucket seats and rear bench seat have been reupholstered in beautiful Red vinyl. The dash, door panels and steering wheel are all in wonderful condition and appear to be in their stock configuration. The dash is equipped with a 140 MPH speedometer, amp gauge, temperature gauge, oil pressure gauge, and fuel gauge, along with a retro-style AM/FM radio. Whether you're looking to buy your very first classic car or you're adding to stable of ponies, this 1966 Ford Mustang is an excellent choice. Give us a call today!