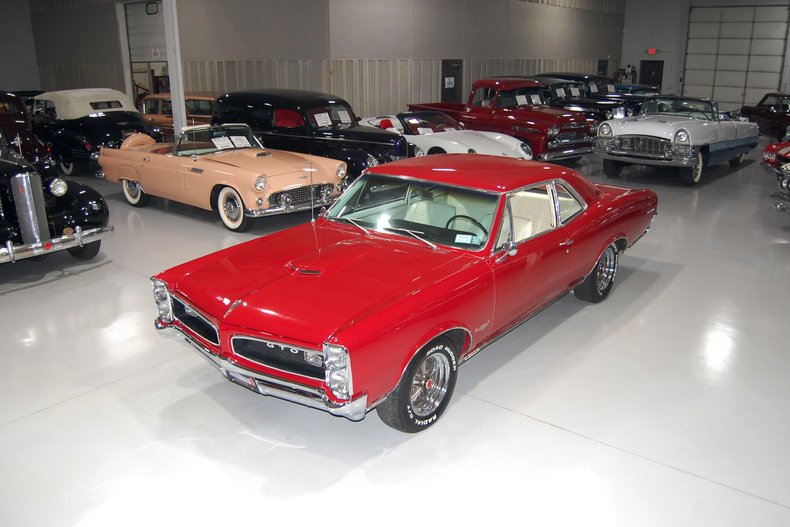 This 1966 Pontiac GTO is a fun-to-drive, real deal GTO, with great muscle car options! When Pontiac introduced the GTO in 1964, it was just an an option package for the LeMans. But what started as a mere performance-oriented option package for the mid-size Pontiac became an instant hit and launched the muscle car era! Building off the previous years' success, 1966 marked the first year that the GTO became its own separate model line within Pontiac. While the dual stacked headlights were carried forward from the '65 GTOs, the GM A-Body platform was largely redesigned. New for the 1966 GTO was a new-look grille and a more "coke-bottle" look from the sides. The taillights were also restyled to the three stacked louvered design that was only used in 1966. Under the hood on this GTO is a 389 Cubic Inch V8 engine paired with an upgraded Holley single 4 barrel carburetor. The NOM 389 V8 is hooked up to a 4 speed manual transmission that makes this Pontiac muscle car an absolute blast to drive. This '66 Goat is loaded with fantastic options! Power steering makes sure that you can get in and out of those tight spaces at car shows or the local drive in. With power front disc brakes, this 1966 GTO has plenty of stopping power and bringing it to stop is much easier. Exhaust exits through a dual exhaust setup that gives this car a nice throaty sound. Power is sent through the rear Safe-T-Track rear differential so that you'll be able to keep the rubber to the pavement. Riding on Magnum 500 Wheels with P215/75R15 Raised Letter Radials in the front with matching P235/70R15 Raised Letter Radials in the rear, this 1966 GTO has nice stance and great look. The exterior has been refinished in its correct color scheme of Montero Red and the chrome and brightwork around the exterior has a nice look as well. The interior on this GTO is superb! The front bucket seats and rear bench seat have been correctly reupholstered in Parchment vinyl. The dash, door panels, center console and steering wheel all appear to be in in their mostly stock configuration, with a few minor upgrades. The dash is equipped with a 120 MPH speedometer, fuel gauge, clock, and AM radio, along with battery, oil pressure, and temperature indicator lights. A trifecta of Summit Racing auxillary gauges are neatly mounted under the dash, including gauges for oil pressure, volts, and water temperature and a 8,000 RPM Bosch tachometer was added as well. The stock shifter knob was also switched out for a Hurst "T" style handle which feels great in the hand on this 4 speed muscle car. Whether you're adding to your Pontiac collection or you're buying your first classic muscle car, this 1966 Pontiac GTO would make an excellent choice. Give us a call today!