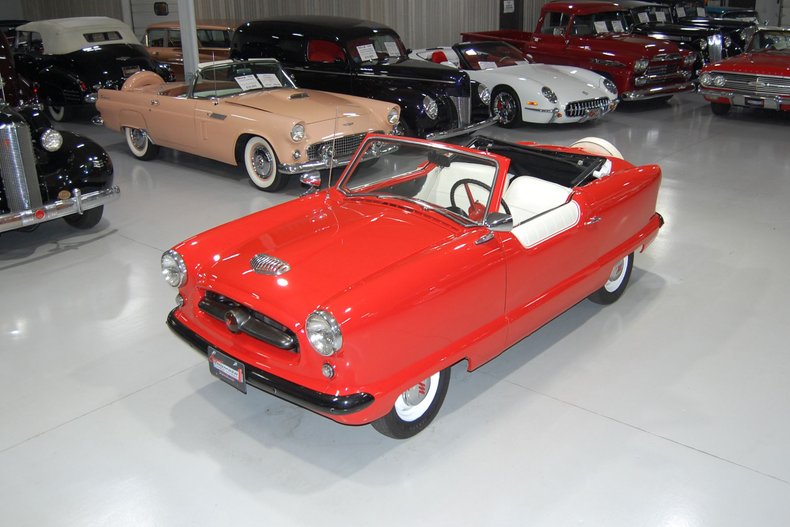 This 1955 Nash Metropolitan Convertible is a super cute 50s microcar and is ready to cruise, especially considering the price of gas these days! When the Metropolitan debuted in 1954, it was ahead of its time for 2 reasons. First, it was the first American-made subcompact economy car, a genre of passenger cars that has risen over the past few decades and really seems to be hitting its stride today. Second, it was in a way a forerunner to Cadillac's Allente Convertible which, like the Metro, was a joint venture that combined parts from an American auto maker with that of a European manufacturer. In the case of the Nash Metropolitan, the drivetrain was sourced from British manufacturer, Austin. The bodies built by British company Fisher & Ludlow, and then assembled Austin's Longbridge, England, plant, with the final products being shipped the United States for sale through Nash dealers. This particular Nash Metropolitan comes to us with southern history having spent time in Nevada, Arizona, and Florida. Powering this 1955 Metropolitan is an upgraded 1500 CC Inline 4 Cylinder engine paired with a single barrel carburetor. The 1.5 L Inline 4 is backed by a 3 speed manual transmission that is shifted using the three-on-the-tree shifter. The white vinyl convertible top is operated manually and is in wonderful condition. The chrome and brightwork around the exterior of this little Metro is nice condition as well. With dual outside mirrors, squeezing this cute little cruiser into tight spaces is made even easier. In quintessential Nash style, all 4 wheels are recessed into the fenders. Riding on 13" steel rims with "M" logo hubcaps and blackwall radial tires, this '55 Nash has a great look and even better ride. A rear mounted continental kit with white vinyl cover adds to the classic 50s look of this little Metro. The exterior has been beautifully refinished in basecoat/clearcoat in its original color, Canyon Red. The interior on this Metropolitan looks great! The front split bench seat and the rear bench seat have been reupholstered in white vinyl. The door panels feature matching white vinyl as well. The painted dash appears be in its stock configuration and matches the exterior look of the car. The dash is equipped with an 80 MPH speedometer, fuel gauge, and AM radio. Whether you're looking to purchase you very first classic car or you're adding to your existing collection, this 1955 Nash Metropolitan Convertible would make a wonderful choice. Give us a call today!