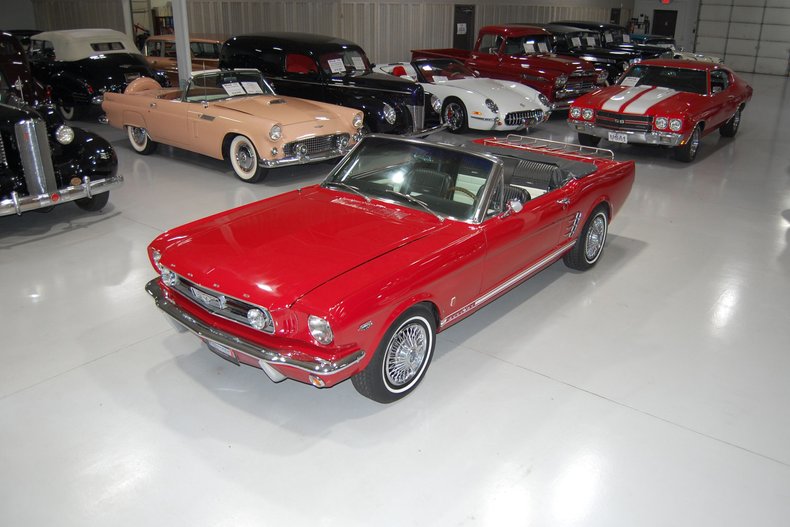 This 1966 Ford Mustang Convertible is wonderful GT Tribute restoration and is ready for some serious summer cruising. Initially debuting as a mid-year model in 1964, the Ford Mustang was an instant hit. With their sporty look and feel, along with their modest price tag, the target market for the new Mustang was young entry level buyers who were looking fun cars to drive, looked cool, and didn't cost too much. With the success of the Mustang, an entirely new sub-category/genre of muscle car was launched with the Pony Car. Two years after its mid-year launch, the Ford Motor Company did not mess with its enormously successful pony car and little was changed with the '66 Mustang. Ford even advertised the 1966 Mustang with the tag line of "Relax Mustang lovers. Your favorite car hasn't changed much in 1966." Perhaps the biggest exterior style change occurred to the grille, shifting away from the '65 honeycomb style to the horizontal bar, floating Mustang look. The 1966 Mustang interiors changed a little as well from the previous year model with the introduction of a 5 pot instrument cluster treatment, giving the new Mustangs more of a race car look and feel. With over 1.25 million Mustangs sold in 1966, Ford made all of the right style changes. This particular Mustang Convertible comes to us from a collector who owned and cared for the car for 25 years. Under the hood on this '66 Mustang is a 289 Cubic Inch V8 NOM engine paired with a Holley single 4 barrel carburetor. This Mustang is a car anybody can take for a spin around the block because the 289 V8 is backed by an Automatic Transmission. Dual exhaust gives this classic Mustang a nice throaty sound. With Front Disc Brakes, this little red Mustang has plenty of stopping power. The chrome and brightwork is in nice shape as well, along with the luggage rack mounted on the rear decklid. With power steering, driving this 1966 Mustang Convertible is an absolute joy since maneuvering in and out of tight spaces is made much easier. The white vinyl power convertible top goes up and down with the simple flick of a switch should you get caught in the rain. The exterior has been refinished in a beautiful Candy Apple Red giving the car a truly iconic appearance. Riding on Radial Tires with Wire Wheel Covers, this Ford Mustang has a great look and even better ride. The interior on this Mustang is spectacular. The front bucket seats and rear bench seat feature the deluxe Pony interior and have been reupholstered in Black and White vinyl. The woodgrain steering wheel, dash with woodgrain accents, door panels and woodgrain accented center console all have a fantastic look and appear to be in their stock configuration. The dash is equipped with a 140 MPH speedometer, temperature gauge, amp gauge, oil pressure gauge, fuel gauge and an upgraded Kenwood AM/FM/Cassette entertainment system. Whether you're adding to your existing Mustang stable or you're buying your first classic car, this 1966 Ford Mustang Convertible would make an excellent choice. Give us a call today!