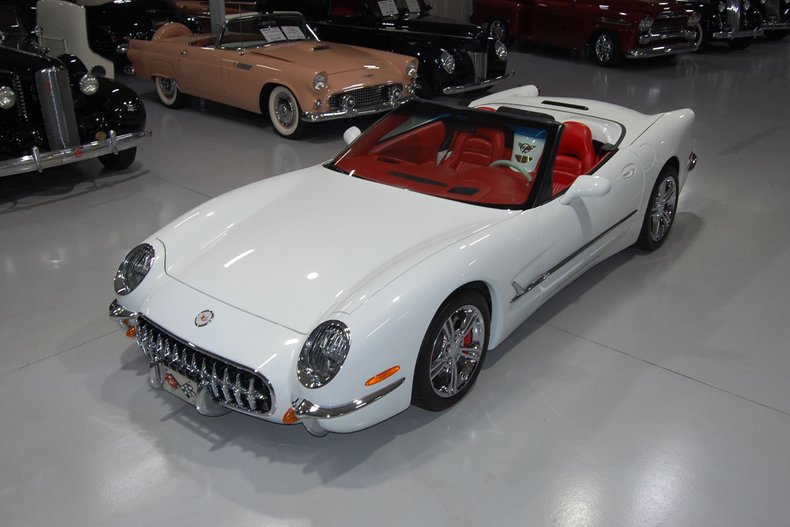 This 2004 Chevrolet Corvette '53 AAT Commemorative Edition is an extremely low-miles convertible and is by far the best documented example we've ever seen. 2004 marked the conclusion of the Fifth Generation C-5 Corvettes. While Chevrolet commissioned a concept prototype with the intention that the car would become the 50th Anniversary edition, General Motors opted for a more conservative model instead. When the radical retro design was abandoned, a longtime GM designer purchased the rights and factory molds, and went on to create Advanced Automotive Technologies (AAT) the eventual maker of the '53 Commemorative Edition Corvette. For a base price of $32,500, AAT would convert a customer provided C5 Corvette Convertible into a show-stopping collectible that had the performance of a late-model Corvette with the design influences of a C1 1953 Corvette. Under the base package AAT Conversion, the Corvette is outfitted with a new hood, new front and rear fascia, new headlights and front turn signals,, side marker lights, a chrome diecast grille, front and rear chrome bumpers, new rear quarter panels, new taillights and backup lights, red painted brake calipers, special White Pearl PPG paint, along with several interior upgrades to give the car a 1953 C1 look. On this particular example, the original owner purchased a brand new Arctic White 2004 Corvette, then spent $32,500 on the base AAT Conversion Package plus another $5,400 in optional upgrades. This particular 2-owner '53 Commemorative Edition Corvette is number 103 of 220 and has less than 11,000 miles and comes with extensive paperwork including the original window sticker, copies of the original M.S.O. and title, copies of the AAT purchase order and copies of the communications between the owner and AAT. Powering this AAT Corvette is a Fuel Injected 5.7 Liter LS1 V8 that pushed out 350 horsepower when new. The engine compartment has a fantastic look having been equipped with a carbon fiber dress up kit. The 5.7L LS1 V8 is mated to a 4 Speed Automatic Overdrive Transmission ensuring that anybody can take this baby for a spin around the block. Exhaust exits the engine through HPS Street Series Stainless Steel Headers into a Borla Performance Exhaust which gives this C5 Corvette a nice throaty sound. This '04 Corvette is loaded with options! Power Front and Rear Disc Brakes utilizing KVR drilled rotors ensure that you can stop especially with all that horsepower under the hood. All 4 wheels are also equipped with Anti-Lock Brakes as well for safer stopping. Power speed sensitive rack and pinion steering improves the driving experience and helps you get in and out of those tight car show parking spaces. Power is sent to the rear axle via a limited slip differential to ensure that you keep the rubber to the pavement. Equipped with Dual Zone Climate Control and Air Conditioning, you will stay cool on those hot summer days and stay warm on a cool fall or spring night. The dual outside mirrors are both powered and heated, though hopefully you wouldn't be driving this beauty at a time where you'd need to heat the mirrors. This C-5 Corvette is also outfitted with several safety and security features such as air bags, seat belts, remote key-less entry, and a security system. The exterior on this '53 Commemorative Edition Corvette was refinished by AAT in a beautiful Pearl PPG White basecoat/clearcoat that harkens back to the original '53 C1 Corvettes. The white vinyl convertible top is in fantastic condition and is easily operated manually by a single person. The interior on this '53 Commemorative Edition Corvette is absolutely stunning! The Torch Red Leather Bucket Seats are in fantastic condition as is the red carpeting. The red and white leather door panels have a fantastic look as well. Even the door sills were upgraded by AAT. The red leather dash and red/white leather wrapped tilt/telescoping steering wheel are in superb condition. The dash is equipped with a 200 MPH speedometer, 7,000 RPM Tachometer, oil pressure gauge, temperature gauge, battery gauge, and fuel gauge. One of the unique features of the later C5 Covettes is the heads-up display which makes this car a joy to drive. You'll also be able to listen to all of your tunes while cruising since this convertible is equipped with an AM/FM/CD entertainment system. Whether you're a Corvette Collector or you're just looking to buy a classic car that you can just hop in and drive, this 2004 Chevrolet Corvette '53 AAT Commemorative Edition would make an excellent choice. Give us a call today!