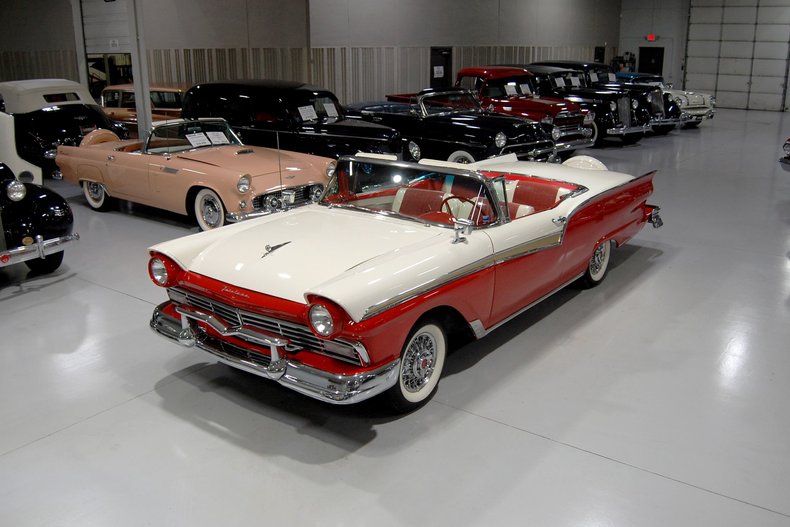 This 1957 Ford Fairlane 500 Skyliner Retractable is a beautifully restored, engineering marvel that everybody can enjoy. Throughout its history, the Ford Motor Company has had strong track record for creating some of the most revolutionary and iconic automobiles in the United States. Just think, Ford changed automobile manufacturing with its Model T, then introduced a mass-market V8 in the 'Deuce Coupe' Model B, and then came along cultural icons such as the Thunderbird, Mustang, and Bronco. However one oft-overlooked revolution came on December 8, 1956 at the New York Auto Show, Ford released its 1957 Skyliner Retractable hardtop on its Fairlane 500 platform which was completely redesigned from its previous two iterations. The Skyliner was the first convertible of its kind, that is, a hardtop convertible–something that is very much commonplace amongst modern convertibles today. To retract (and place) the hardtop, the car uses 10 solenoids, 7 high-torque motors, 610 feet of wire, along with numerous relays and microswitches making it truly a miraculous feat of engineering especially for 1957. Interestingly, the retractable hardtop was originally slated for Ford's top of the line Continental Mark II but this idea was eventually scrapped for the Mark II and was later integrated into Ford's Fairlane 500 instead. Ford spent millions developing the unique design that combined the looks of a hardtop with open feel of a convertible, but despite the Skyliner being a a hit with critics, the company likely did not sell enough of them (~21,000 units) to recoup its research and development investment. This particular Skyliner was comes to us from a southern based collector who purchased the car after it was completely restored in 2007. Powering this '57 Retractable is a 292 Cubic Inch V8 engine paired with a single 2 barrel carburetor. The 292 V8 backs up to an automatic transmission, ensuring that anybody can take this 50s cruiser for a spin around the block. Dual exhaust gives this 1957 Skyliner a nice throaty sound. Getting in and out of those tight spaces at is a total breeze since this Ford Skyliner is equipped with power steering. The chrome and brightwork around the exterior of this Ford Retractable is in wonderful condition. Riding on wide whitewall radial tires that are wrapped around chrome wire wheels with spinner hubcaps, this 1957 Skyliner has a fantastic look and even better ride. The exterior has been refinished in a beautiful two-tone paint scheme consisting of Torch Red and Colonial White, which gives this Ford an iconic 50s look. The retractable hardtop is painted in matching Torch Red paint and it goes up and down easily with the simple push or pull of an under-dash button. The interior on this 1957 Ford is absolutely stunning! The front and rear bench seats have been reupholstered in Colonial White Vinyl with Red Airweave Fabric inserts. The red painted dash, door panels, and steering wheel all show well and appear to be in their stock configuration. The dash is equipped with a 120 MPH speedometer, temperature gauge, fuel gauge, AM push-button radio, and clock. Whether you're an established blue oval collector or you're looking to purchase your first classic car, this 1957 Ford Fairlane 500 Skyliner would make an excellent choice. Give us a call today!