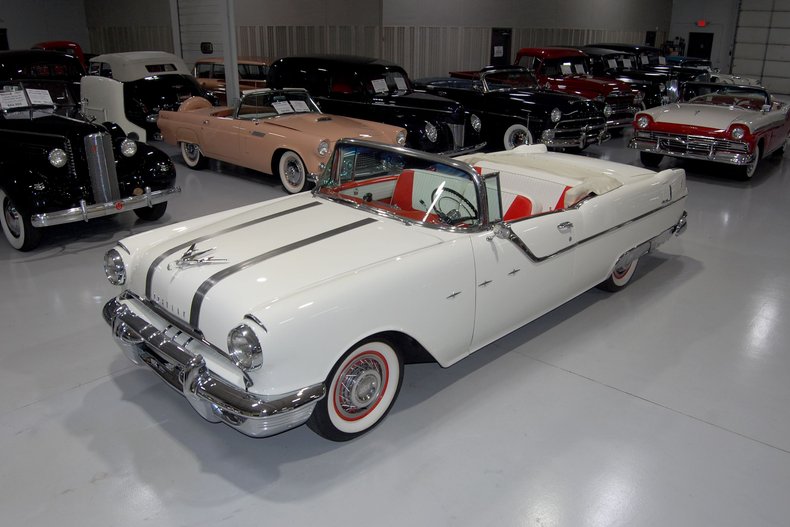 This 1955 Pontiac Star Chief Convertible is a stunningly restored example of Pontiac's top-of-the-line premium model for '55. Originally making its debut in 1954, the Star Chief became Pontiac's prestige model sitting at the top Pontiac's passenger car hierarchy and was equipped with Pontiac's straight 8 engine. When the 1955 Pontiac models were introduced to the public in mid-October 1954, Pontiac had completely re-designed the exterior appearance of the Star Chief and had another trick up its sleeve, a brand new Overhead Valve V8 engine. The new OHV V8 engine was named the "Strato-Streak" and was the first of its kind for Pontiac although the division did in 1932 equip some of tis models with flathead V8s. The newly restyled Star Chief had a flatter looking hood along with additional trim and moldings, including three new star emblems on the front fenders and doors as well as a light up "Indian Chief" hood ornament. The new '55 Star Chiefs were also 11 inches longer than the previous year adding to the upscale look and feel of the car. This particular example comes to us from a southern-based collector who acquired the car nearly 30 years ago and had the car completely restored approximately 15 years back, and has meticulously cared for the car ever since. Powering this '55 Star Chief Convertible is a 287.2 Cubic Inch 'Strato-Streak' V8 engine, paired with a single 4 barrel carburetor. The 287 Strato-Streak V8 is hooked up to a Hydra-Matic Automatic Transmission so that just about anybody can take this 50s classic for a cruise around the block. This '55 Pontiac is loaded with desirable options! With power front disc brakes, provides plenty of extra stopping power. Power steering makes driving this classic Pontiac much more enjoyable and helps you get in and out of tight spaces. The black canvas power convertible top goes up and down with ease and is operated using the dash-mounted switch. This Star Chief Convertible as also retrofitted with a modern air conditioning system so that you can stay cool even on the hottest summer days. The chrome and brightwork around the exterior of the car is in wonderful shape as well. The exterior of this Pontiac has been refinished in beautiful Polo White paint that gives the car an elevated look. Riding on wide whitewall radial tires outfitted with wire basket wheel covers, this 1955 Star Chief has a fantastic look and even better ride. The interior on this '55 Pontiac Convertible is absolutely stunning! The front and rear bench seats have been correctly reupholstered in Red and Ivory vinyl and are in fantastic shape. The dash, door panels and steering wheel all appear to be in their stock configuration and are in wonderful condition. The dash is equipped with a 120 MPH speedometer, battery gauge, temperature gauge, oil pressure gauge, and fuel gauge, as well as a clock and AM radio that has been retrofitted to receive FM stations. The air conditioning controls are tastefully integrated into the glove box so as to not take away from the stock appearance of the car. The power windows work great and are operated using the door mounted switches. Whether you're looking to add to your Pontiac collection or you are buying your very first classic car, this 1955 Pontiac Star Chief Convertible would make an excellent choice. Give us a call today!