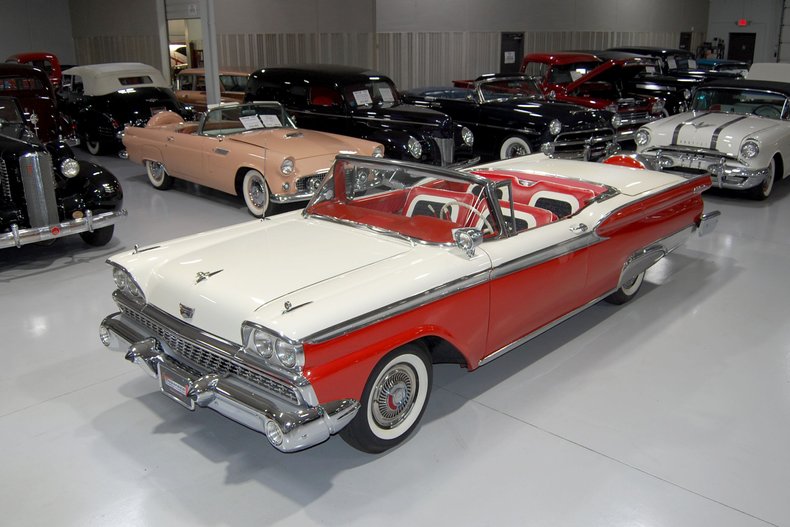 This 1959 Ford Fairlane 500 Galaxie Skyliner is an absolutely stunning example and is loaded with numerous options. 1959 was a notable year for the Ford Motor Company in that it completely redesigned its product offerings. All of these changes led to what some deemed one of the most beautiful Fords ever built with the 1959 Ford winning the Gold Medal for Exceptional Styling at the Brussels World Fair. The new-look '59 Fords had flatter front fenders housing the dual headlights and the flatter-looking hoods to the rear fenders with molded back-up lights. Being that the world was infatuated with the Space Race in the late 50s, the American automakers, including Ford, adopting space-inspired nomenclature and design influences with 1959 being the first year that Ford adopted the "Galaxie" moniker for its top-of-the-line trim level. Of the nearly half million Galaxies produced by Ford in 1959, only 12,915 were the Skyliner model which makes this particular vehicle quite rare. The Skyliner, of course, being the convertible with a retractable hardtop that fully retracted into the rear portion of the vehicle and gave the cars the looks of a hardtop with open feel of a convertible. FoMoCo spent a fortune developing the underlying technology for its iconic Skyliner though it was originally slated for the Continental Mark II. When that idea was scrapped, Ford's engineers retrofitted the retractable to its Fairlane models and debuted the Skyliner in 1956 for the '57 models. With the use of 10 solenoids, 7 high-torque motors, 610 feet of wire, along with numerous relays and microswitches, the retractable hardtop is still to this day a true feat of engineering. Under the hood on this '59 Galaxie Skyliner is a 352 Cubic Inch V8 engine paired with a single 4 barrel carburetor that pushed out 300 horsepower when new. The 352 V8 is hooked up to an Automatic transmission so that anybody can have the pleasure of driving this iconic 50s cruiser. Being that the Galaxie was a top trim level for Ford back in 1959, they are usually (like this one) loaded with options. With power steering, getting in and out of those tight spaces at car shows or at the local drive-in is a breeze. Power brakes makes bringing this beautiful Ford to a complete stop much easier. A rear mounted continental kit adds to classic 50s look of the car. The exterior on this '59 Skyliner has been beautifully refinished in a two-tone paint scheme consisting of Torch Red and Colonial White. Riding on wide whitewall bias-ply tires with full Thunderbird Wheel Covers with the Sunray Emblem, this '59 Ford has a great look cruising down the road. The chrome and brightwork around the exterior of this 1959 Ford has a fantastic appearance as well. The Torch Red retractable hardtop goes up and down with ease and is operated using an under-dash mounted switch. The interior on this 1959 Retractable is absolutely stunning! The front and rear bench seat has been beautifully reupholstered in Torch Red and Colonial White Vinyl accented with silver piping along with Raven Black Fabric inserts with Silver Strand. The tri-tone door panels are in wonderful condition as well with Red and Black Vinyl with silver trim inserts. The red painted dash and white steering wheel appear to be in their stock configuration as well and are in fantastic shape. The dash is equipped with a 120 MPH speedometer, temperature gauge, and fuel gauge, as well as a clock and push-button AM radio. The power windows go up and down with simple flick of a button. Whether you're looking to purchase your very first classic car or you want to add to your existing blue oval collection, this 1959 Ford Fairlane 500 Galaxie Skyliner would make an excellent addition. Give us a call today!