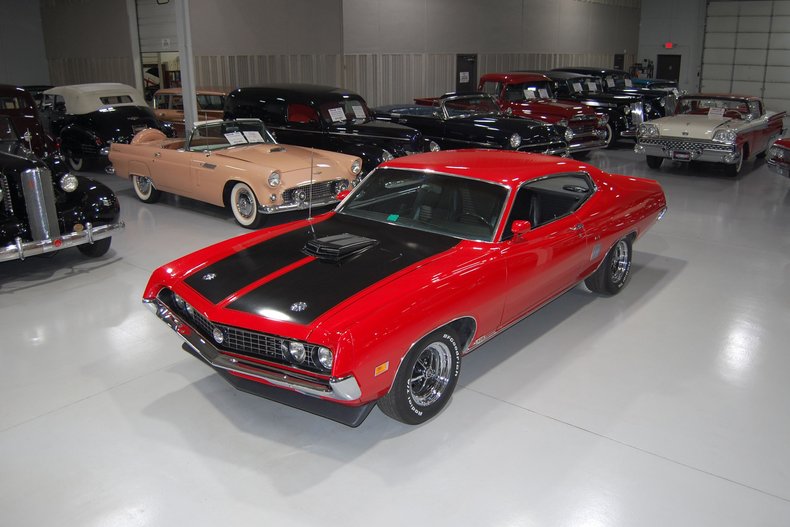 This 1970 Ford Torino GT is a spectacularly restored restomod with some serious performance. Initially debuting in 1968 as a sub-series for Ford's Fairlane, the Torino was an intermediate sized muscle car slightly larger than the hugely successful Mustang. When 1970 rolled around, the Torino was split off from the Fairlane line and became its own standalone model when it was introduced to the public in mid-1970. The new '70 Torinos recieved a major facelift from the previous year with new "Coke-Bottle" body lines and a new-look front end and grille. Additionally, Ford offered sportier performance-oriented versions in the Torino GT and the GT Cobra, with the Torino GT "SportsRoof" Fastbacks attaining noteworthy sales success. Torino GTs were outfitted with special hood scoops, emblems, and elevated interior trim. Under the Shaker Hood on this '70 Torino is a 351 Cubic Inch Cleveland V8 Stroked to 408 Cubic Inches, paired with a Holley 4 Barrel Carburetor that pushes out huge amounts of horsepower. The 408 Stroker V8 is hooked up to a Tremec 5 Speed Manual Transmission that makes this restomod Torino an absolute blast to drive. The Stroked 351 Cleveland is also outfitted with a number of performance upgrades including an MSD Ignition System, Aluminum Heads and Headers. With Power Disc Brakes on all 4 wheels, bringing this street machine to a stop is much easier. Power is sent through the rear axle via a positraction rear end so that you can be sure that you're keeping the rubber to the pavement. Dual exhaust gives this classic Ford muscle car a nice throaty sound. The exterior has been beautifully refinished in Red basecoat/clearcoat along with black hood stripe decals. The chrome and brightwork around the exterior of this Torino have a great look as well. Riding on BF Goodrich Radial T/A Tires wrapped around Magnum 500 Wheels, this '70 Torino GT has a great look and even better ride. The interior in this 2nd Gen Torino is spectacular! The black vinyl bucket seats and rear bench seat have been beautifully reupholstered in black vinyl. The black padded dash, center console, black vinyl upholstered door panels and steering wheel are in great shape as well and all appear to be in their stock configuration. The dash is equipped with a 120 MPH speedometer, temperature gauge, and fuel gauge. A trifecta of Autogage temperature, oil pressure and volt gauges have been neatly tucked under the dash as well for improved engine reporting. You can also listen to all of your tunes while cruising because a Sony AM/FM/CD entertainment system was added under previous ownership. Whether you're adding another Ford Muscle Car to your existing collection or you're buying your very first classic car, this 1970 Ford Torino GT would make an excellent addition. Give us a call today!