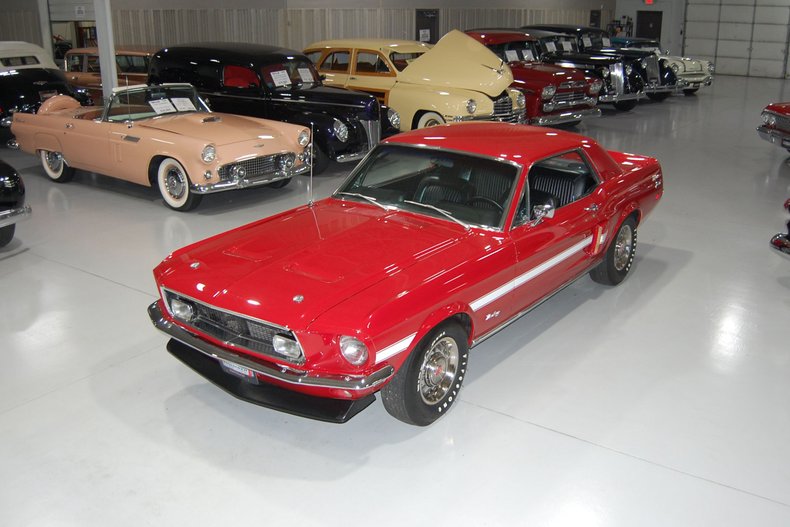 This 1968 Ford Mustang is a GT/California Special Tribute Car that has a fantastic look and is ready to roll! Originally debuting in the middle of 1964, the Ford Motor Company hit a grand slam with its Mustang which has since become an American Icon and created a new category of muscle cars, the Pony Car. What was initially thought up as being a youth-oriented performance car was now, in 1968, beginning to see many copycats from the other US manufacturers including Chevrolet's Camaro, Pontiac's Firebird, AMC's Javelin, Plymouth's Barracuda, and even Mercury's new Cougar. While the body of the '68 Mustang was largely unchanged after the major redesign in 1967, there were some minor changes made to the cars such as new grilles but without horizontal bars. Due to the fact that nearly 20% of all Mustangs had been sold in California, Ford introduced a special trim package in 1968, the California Special, that was only sold in the west coast state. The GT/CS as they were known took on several Shelby inspired features such as the iconic Shelby taillights, decklid and spoiler treatments, and side scoops, as well as special trim and emblems. This particular '68 Mustang has been made to look like the California Special and comes to us from a collector who cared meticulously for the vehicle while under their ownership. Powering this '68 Mustang is an upgraded 351 Cubic Inch Windsor V8 engine that is paired with a single 4 barrel carburetor. The NOM 351 Windsor is hooked up to a C-4 Automatic Transmission, ensuring that anybody can take this pony car for a spin around the block. Dual exhaust gives this Mustang a nice throaty sound. This GT Tribute is a nicely optioned example as well. With power steering, getting in and out of those tight spaces at car shows is a breeze. This Mustang is also equipped with Power Front Disc Brakes so that you'll have plenty of stopping power especially with all of that extra muscle found under the fiberglass hood. Being that this Mustang is California Special Tribute it is complete with all of Shelby-style trim, including special striping, side scoops, rear decklid with integral spoiler, and sequential taillights. The blacked out front grille also received the CS treatment with Lucas Fog Lamps and the deleted Pony emblem. The exterior has been wonderfully refinished in Candy Apple Red. The interior on this Pony Car is absolutely stunning! The front bucket seats and rear bench seat have been reupholstered in beautiful Black vinyl. The dash, door panels, center console, and steering wheel all appear to be in their stock configuration. The dash is equipped with a 120 MPH speedometer, oil pressure gauge, alternator gauge, temperature gauge, and gas gauge, as well as a push-button AM radio and a steering column-mounted AutoMeter 6,000 RPM tachometer has been added. Whether you're looking to add to your existing stable of Ponies or you're buying your very first classic car, this 1968 Ford Mustang GT/California Special Tribute would make an excellent choice. Give us a call today!