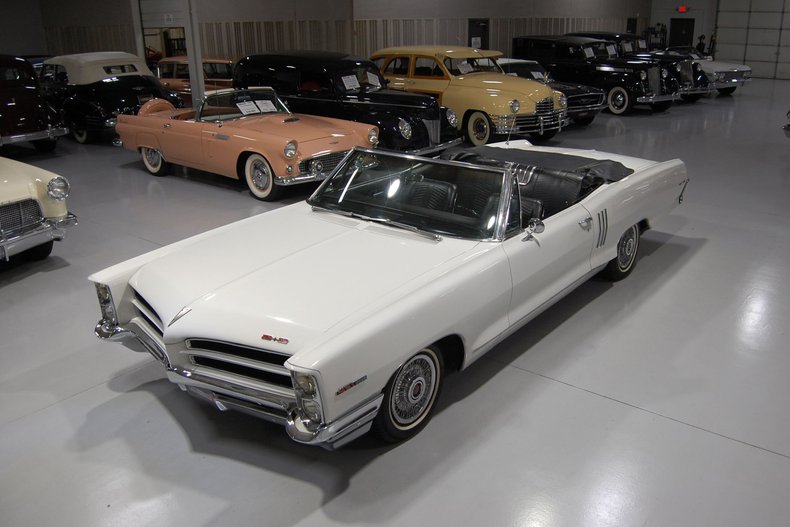 This 1966 Pontiac 2+2 Convertible is a beautifully restored big-block convertible that is ready for some boulevard cruising! Known as GM's performance-oriented division, Pontiac lived up to the hype by creating the first Muscle Car and kicking off the Muscle Car era. 1966 was a remarkable year for General Motors' Pontiac Motor Division which had captured over 10% market share for the very first time in large part due to its performance-oriented reputation. Introduced on October 7, 1965, the Pontiac 2+2 became its own standalone model which was a departure from the previous years where it was merely an option package on the '64 and '65 Catalinas. Marketed as the GTO's Big Brother, the new 2+2 models, while larger, were not slouches with the 421 V8 engine coming as standard equipment along with heavy duty suspension and low restriction exhaust. Pontiac added all sorts of special trim around the exterior of the new 2+2 to make sure that everyone knew that the 2+2 was a beast. The 2+2 Convertible was also one of the most expensive Pontiacs offered in 1966, with an initial MSRP of $3,602 and over $500 more than its little brother GTO Convertible. This particular 2+2 Convertible comes to us from a southern-based collector who meticulously cared for the car while under their ownership. Under the hood on this 2+2 is a 421 Cubic Inch V8 engine paired with a single 4 barrel carburetor that was said to push out 338 horsepower when new. Dual exhaust gives this classic Pontiac a nice throaty sound. The 421 V8 is hooked up to an Automatic Transmission ensuring that just about anybody can take this baby for a cruise. This Pontiac is particularly well optioned! With power steering, getting in and out of those tight spaces at car shows is a breeze. Power brakes provide plenty of assistance bringing this Two Plus Two to a stop especially with all that muscle under the hood. The black vinyl power convertible top is in wonderful condition and goes up and down with the simple flick of a switch. The exterior has been beautifully refinished in its original color, Cameo Ivory, which gives the car a nice elevated look. Riding on Whitewall Radial Tires with Wire Wheel Covers, this Pontiac 2+2 has a fantastic look and even better ride. The interior on this 2+2 Convertible is stunning! The front bucket seats and rear bench seat have been reupholstered in beautiful Black Vinyl, just how this car came when it rolled off the Southgate, California plant floor. The dash, door panels, center console, and steering wheel are all in superb shape and appear to be in their stock configuration. The dash is equipped with a 120 MPH speedometer, battery gauge, gasoline gauge, clock, and upgraded retro-style AM/FM/Cassette entertainment system. Sunpro oil pressure and temperature gauges have also been tucked neatly under the dash for improved engine performance reporting. Whether you're looking to buy your very first classic muscle car or you're an established Pontiac collector, this 1966 Pontiac 2+2 Convertible would make an excellent choice. Give us a call today!