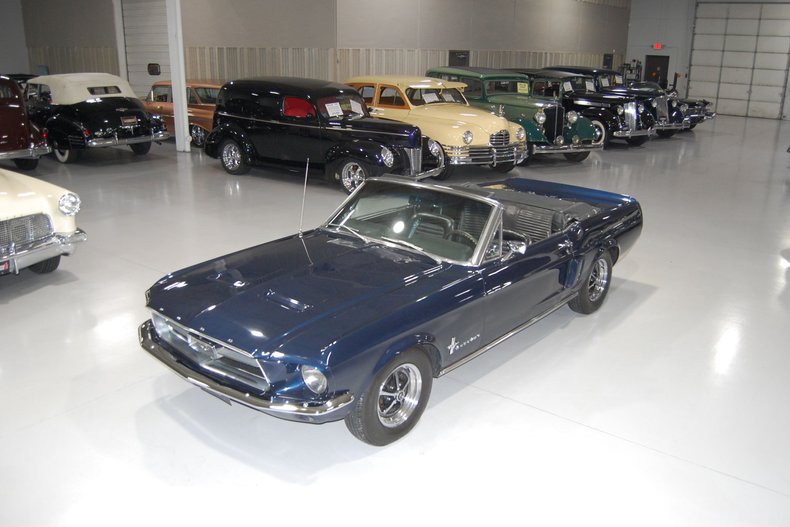 This 1967 Ford Mustang Convertible has plenty of power, a sophisticated look, and is an overall blast to drive! 1967 was a bit of turning point for Ford's Mustang, which wildly successful through 1966. What was a youth-oriented, modestly priced car with enticing performance all of the sudden had competition in the category that it created, the Pony Car. Facing competition from GM's new Camaro, FoMoCo's Mercury Cougar, and a bevy of Chrysler competitors, the 1967 Mustang had to appeal to an even broader audience. The '67 Mustang needed to be more powerful, be more luxurious, yet still remain modestly priced, and this new Mustang achieved all three charges. Introduced on September 30, 1966, the new 1967 Ford Mustang had a brand new look! The style of the new-look 67 Mustang had retained the original flavor of the original stylings of the mid-year '64-'66 but with several updates. The grilles were larger with a wider opening providing better air flow to the new bigger engines.. The side body-lines became more pronounced giving the new Mustang a more dramatic silhouette. Even the interiors were spruced up for a more luxurious feel! Powering this particular '67 Mustang is a 289 Cubic Inch V8 engine paired with a single 4 barrel carburetor that gives this pony plenty of pep. Dual exhaust gives this Mustang a nice throaty sound. Anybody can take this Mustang Convertible for a spin because the 289 is hooked up to an Automatic Transmission. Bringing this powerful pony to a stop is made much easier because it is equipped with front disc power brakes with power drums in the rear. This 1967 Mustang Convertible has a great look and even better ride with P205/75R14 radial tires on Magnum 500 style rims on all 4 wheels. Shelby style taillights have been added by previous ownership for a slightly custom look. The white vinyl convertible top on this Mustang is in wonderful shape and it can be put up in a moment's notice should you hit any unexpected rain. The exterior has been refinished in a beautiful Nightmist Blue giving this 1967 Mustang Convertible a truly elevated look. The interior on this Mustang is stunning! The front bucket seats and rear bench seat have been reupholstered in black vinyl. The door panels, center console, padded dash, and woodgrain steering wheel are all in fantastic shape as well. The dash is equipped with a 120 MPH Speedometer, oil pressure gauge, temperature gauge, gasoline gauge, and an 8,000 RPM Sunpro Super Tachometer and an AM/FM/Cassette entertainment system have been added as well. Whether you're looking for your very first classic Mustang or your garage is full of them, this 1967 Ford Mustang Convertible would make an excellent choice. Give us a call today!