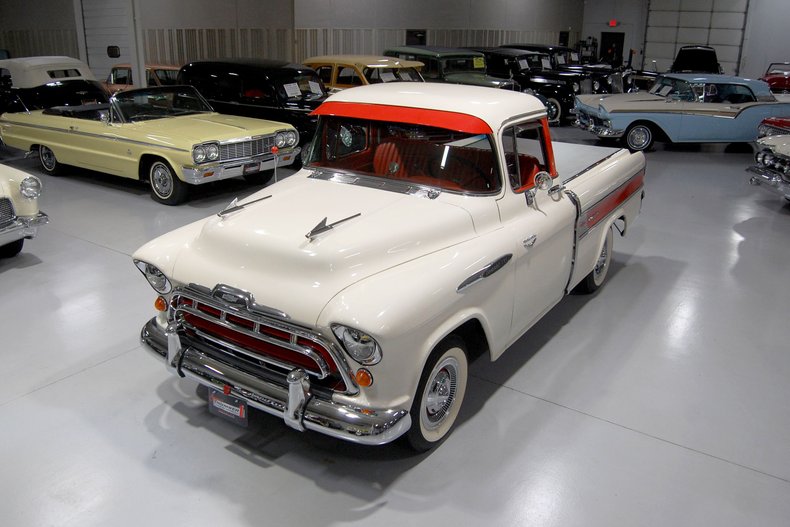 This 1957 Chevrolet Cameo Pickup Truck is a prestigious, special edition Chevy pickup with a truly glamorous look. Originally debuting in 1955 as a part of Chevrolet's "Task Force" truck line, the Cameo was ahead of its time. Considered by Chevy as "the sports model of the truck field," the new Cameo Pickup Truck was touted for its dazzling, and more sporty look. The new-look grilles in 1957 were chrome on the Cameo and the Cameo also received special trim treatment including a contrast band that runs from the cab to taillights and special Cameo script. Perhaps the most distinctive feature of the Cameo is the use of fiberglass in the bed of pickup which gave these trucks an even more elevated look. The 1957 Cameos saw the introduction of wraparound rear windows for improved visibility and the optional 265 V8 engine used in the previous years was increased to a 283 Cubic Inch model. Likely due to its position as a luxury truck, Chevrolet sold very few Cameos in 1957, a total of 2,244 which makes these trucks especially collectible today. Under the hood on this particular '57 Cameo is a 283 Cubic Inch V8 engine paired with a single 4 barrel carburetor that provides plenty of power to this classic pickup truck. Anybody can drive this 1957 Chevy since the 283 V8 is backed up to an Hydramatic Automatic transmission. A modern air conditioning system has been added to this Cameo Pickup Truck by previous ownership so that you can stay cool while cruising even on the hottest summer days. The fiberglass pickup box is in nice condition and is covered by a vinyl tonneau cover. This Cameo rides on wide whitewall tires on steel rims with hubcaps and beauty rings which gives this truck a fantastic fifties look. The exterior of this Cameo has been refinished in a beautiful two-tone paint scheme consisting of Bombay Ivory with Cardinal Red accents. The interior on this 1957 Cameo Carrier looks great! The front bench seat has been reupholstered in red vinyl which gives this truck a mild custom look inside. The dash, door panels and steering wheel are all in wonderful shape as well. The dash is equipped with a 100 MPH Speedometer, temperature gauge, amp gauge, fuel gauge, and AM radio with the air conditioning unit tucked neatly underneath. Whether you're looking for your very first classic pickup truck or you're looking to add to your existing collection, this 1957 Chevrolet Cameo Pickup Truck would make an excellent choice. Give us a call today!