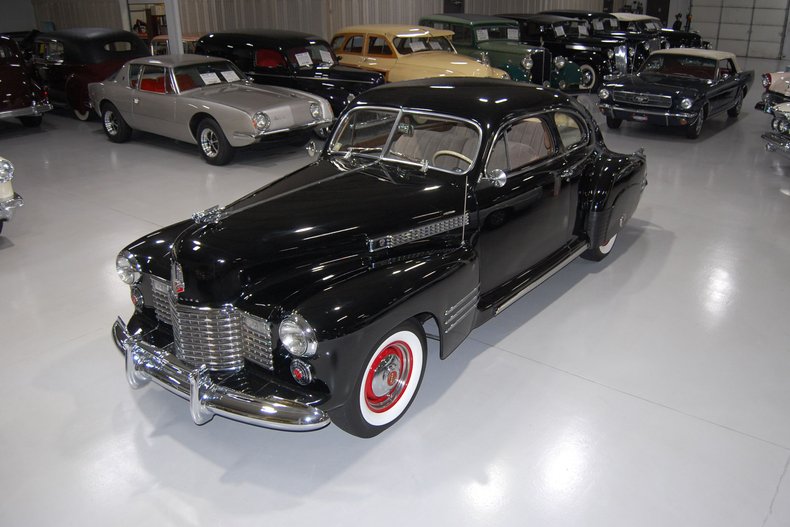 This 1941 Cadillac Series 61 Five Passenger Coupe is an absolute beauty having underwent an extensive frame-off restoration. 1941 was a banner year for Cadillac, with the luxury automaker setting its new all-time sales record at the time and beating its previous record by over 20,000 new cars sold. Likely contributing to Cadillac's success in '41 was the fact that its companion marque, LaSalle, was folded back into Cadillac in 1941 and thus was no longer eating into Cadillac's market share at the higher end of the market. Due to the demise of LaSalle, Cadillac re-introduced its 1941 Series 61 line in September of 1940 in hopes to recapture the customers catered to by LaSalle. While the Series 61 served as an entry-level model for many Cadillac buyers, it was still considered a high-end luxury car and its style would influence automobile design for years to come. The "fastback" body lines gave the Series 61 models a new, more aerodynamic look. The 1941 Cadillacs also featured a new hood design, with the hoods coming down lower in the front and featured louvered side panels. Also new in 1941, the headlights became incorporated into the front fenders further contributing the overall aerodynamic appearance of the car. This particular Series 61 comes to from a California-based collector who has totally babied the car while under his ownership. Under the hood on this 1941 Cadillac is a smooth running 346 Cubic Inch L-Head V8 engine that is paired with a single 2 barrel carburetor that pushed out 150 horsepower in its day. Interestingly, 1941 marked the first time since 1926 that all Cadillacs featured the same engine, the 346 L-Head V8. The 346 V8 is hooked up to a 3 speed manual transmission that is shifted using a column-mounted "3-on-the-tree" shifter. Several engine compartment upgrades were added to this 5 passenger coupe under previous ownership including an electric fuel pump, an electronic Pertronix ignition system, and other electrical system upgrades to improve the overall reliability of the car. The chrome and brightwork around the exterior of this car are in stellar condition. The exterior on this '41 Series 61 Coupe has been beautifully refinished in its original color, Black. Riding on Vincinnes Red painted wheels adorned with Beauty Rings and Cadillac Hubcaps, along with wide whitewall bias-ply tires, this 1941 Series 61 "Sedanette" has a truly classic exterior look. The interior on this '41 Cadillac is impeccable! The front and rear bench seats have been correctly reupholstered in Tan Ribbed Cloth, just how this car was ordered back in December 1940. The woodgrain dash, door panels and steering wheel all appear to be in their stock configuration and are in excellent condition. The dash is equipped with a 100 MPH speedometer, temperature gauge, battery gauge, gasoline gauge, and oil pressure gauge, along with a clock and AM radio. Whether you're looking for your very first classic car or your garage is full of pre-war Cadillacs, this 1941 Cadillac Series 61 Five Passenger Coupe would make an excellent choice. Give us a call today!