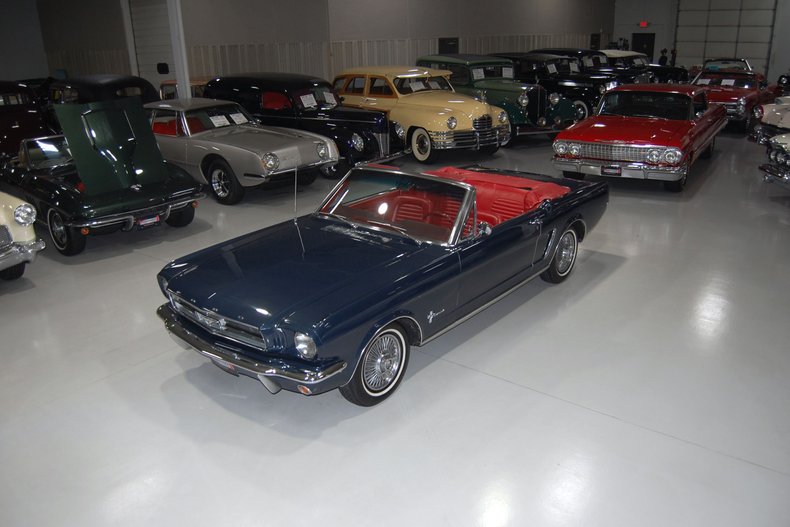 This 1965 Ford Mustang Convertible is a beautifully restored example with southern history and a fantastic story. In the spring of 1964, the very first Mustangs were sold to the public and Ford's newest car would become a grand slam for the company. The Mustang, which launched an entire new genre of muscle cars known as "Pony Cars," started out as the brainchild of Lee Iacocca to appeal to younger buyers. The initial vision for the Mustang was a sporty, youth oriented car with a long hood and short deck, and that vision ultimately snowballed into one of the most successful Ford vehicles of all time. The 1965 version of the Mustang featured few changes from the 1964-1/2 versions, though most notably was a change from a generator to an alternator setup. This particular Mustang Convertible has a very interesting story in that it was ordered by a foreign government official working here in the United States for export, but the car never ended up being exported. The car eventually changed hands a number of times over the years having spent some if its recent years in North Carolina, Tennessee, and Georgia. Powering this 1965 Mustang is a peppy little 200 Cubic Inch Inline 6 Cylinder engine with a single barrel carburetor that pushed out 120 horsepower in its day. Anybody can take this Pony Car for spin around the block because the 200 Inline 6 is hooked up to an Automatic Transmission. This Mustang is also particularly well-optioned. Bringing this '65 Mustang Convertible to stop is made much easier since it is outfitted with power brakes. The single master cylinder has also been upgraded to a dual master cylinder setup for a more reliable braking system as well. With Power Steering, getting in and out of those tight garage spaces or car show spots is also simplified and the overall driving experience is much more enjoyable. The white vinyl power convertible top is in excellent condition and it goes up and down with the simple push of a button. The exterior on this Mustang convertible has been beautifully refinished in its original color, Caspian Blue, which gives this car an elegant look going down the road. This Ford Mustang rides on 4 whitewall radial tires with wire spinner wheelcovers, making for a nice riding and great looking summer cruiser. The interior on this Mustang is fantastic! The front bucket seats and rear bench seat have been reupholstered in the original trim scheme of Red vinyl. The dash, door panels and steering wheel are all in wonderful condition as well and appear to be in their stock configuration. The dash is equipped with a 120 MPH speedometer, temperature gauge, fuel gauge, and AM radio . Whether you're looking for your very first classic car or you have a stable full of Pony Cars, this 1965 Ford Mustang Convertible would make an excellent choice. Give us a call today!