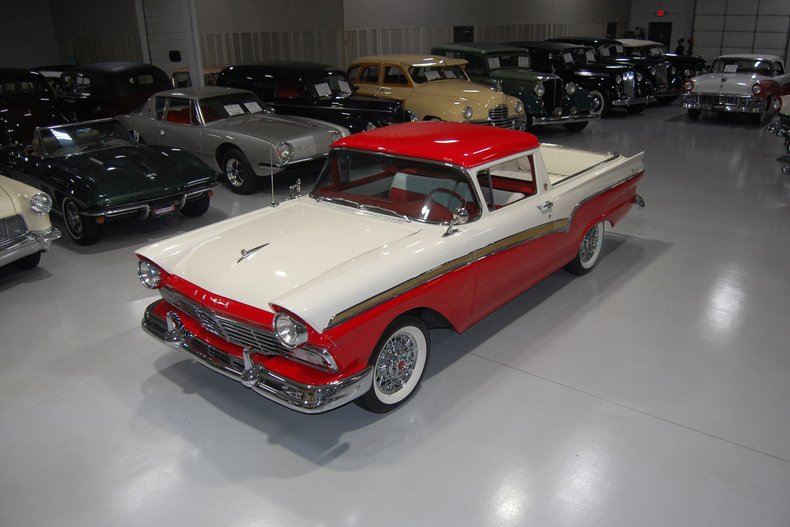 This 1957 Ford Ranchero Custom Pickup is a beautifully restored truck with fantastic stock curb appeal. Debuting on December 8, 1957 at the National Automobile Show in New York, the Ranchero was a well-received new addition to Ford's truck lineup. Although the Ranchero was "new" to the American market, its roots date back to 1934 when the "Ute" was released in Australia. The story goes that the idea for the Ute came from an Australian farmer's wife who asked the local Ford plant to build "a vehicle to go to church in on a Sunday, and which can carry our pigs to market on Mondays?" And that's exactly what Ford did! When the Ranchero was released in the United States, Ford marketed its new truck as "a new idea in motor vehicles." Essentially, the Ranchero was Ford's standard Ranch Wagon with a pickup truck bed mounted at the rear, giving the truck a car-like feel when driving combined with the practicality of a truck. This Ranchero is also the "Custom Pickup" model (66B Code) which were the "flashier" looking of the two available Rancheros in 1957. The Custom Pickup Rancheros featured the distinctive full-length side moldings reminiscent of the other '57 Fords of the day as well as other upgraded trim elsewhere. This particular Ranchero comes to us from a collector who owned the truck for nearly 20 years. Under the hood on this Ranchero is a 292 Cubic Inch V8 engine with a single 2 barrel carburetor that pushed out over 200 horsepower in its day. Anybody can take this classic Ford truck for a spin around the block since the 292 V8 is hooked up to an Automatic transmission. With power steering, getting in and out of tight spaces is much easier and improves the overall driving experience on this Ranchero Custom. The exterior on this Ranchero has been refinished in an eye-catching Flame Red and Colonial White two-tone paint scheme. Riding on Wide Whitewall Radial Tires on Chrome Wire Wheels, this Ranchero has a great ride and a fantastic look. The interior on this Ranchero is superb! The bench seat has been correctly reupholstered in Flame Red and Colonial White vinyl, matching the exterior look of the car. The dash, door panels and steering wheel are all in their stock configuration. The dash is equipped with a 120 MPH speedometer, temperature gauge, and fuel gauge, as well as an AM radio and clock. Whether you're a Fifties Ford Fanatic or you're looking for your very first classic truck, this 1957 Ford Ranchero Custom Pickup would make an excellent choice. Give us a call today!